I was in Amsterdam for Queens Day. This is basically an excuse for Dutch people to dress in orange and jump up and down all day to boshing Eurodance, on the streets and on the canals, couched in the pretext of monarchical patriotism.

Here are some orange people, jumping up and down to boshing Eurodance on a boat. There was a lot of this. 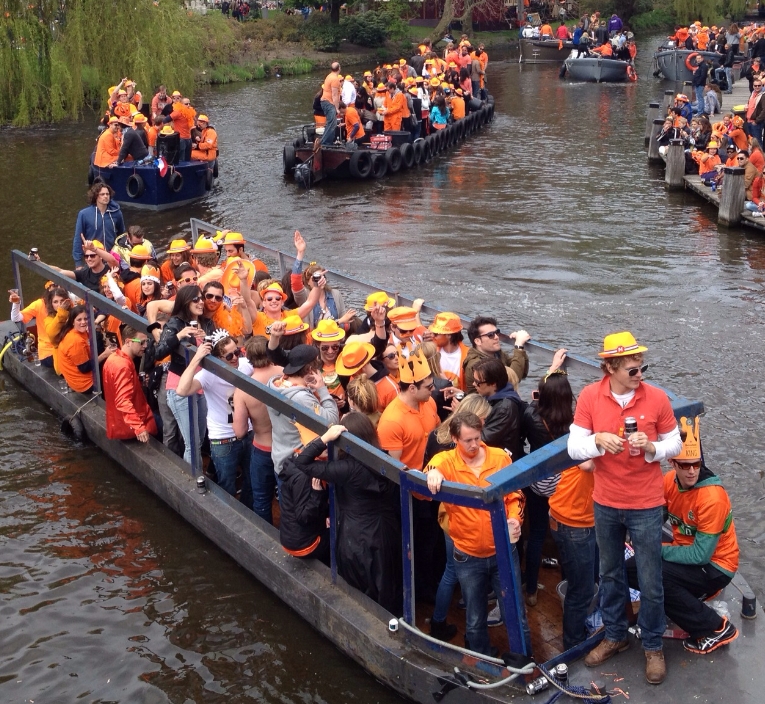 This was a special Queens Day, as it also featured the abdication of Queen Beatrix, monarch since 1980, in favour of her son Willem-Alexander. Dutch royals roll differently from our lot, and abdications are their usual way of doing things. At the last abdication, the outgoing Queen Juliana is supposed to have collapsed in sobs (or so I was told; can’t be arsed to fact-check), but no such dramas ensued this time round, at the really rather dull abdication ceremony. There was however a goodly amount of rapid blinking, suggestive of some sort of emotion, from the incoming King and his glamorous Argentinian consort Maxima, who had worked her way through three costume changes by teatime.

After the really rather dull abdication ceremony, there was an almost as dull inauguration ceremony, in which a crown was laid out for the new King, but never actually placed on his head. A humble bunch, your House of Orange. Prince Charles was in attendance, as he had been in 1980. He sees them come and he sees them go. How galling that must be.

My host for the long weekend was Alan, who some of you might remember as Reluctant Nomad. Alan gave up blogging in 2007, shortly after being voted South Africa’s best gay blogger, which was pretty good going for an ex-pat. Perhaps he felt his work was complete.

On the morning of Queens Day, we visited the newly re-opened Rijksmuseum, where we spotted this Dutch Renaissance dude checking his Twitter. 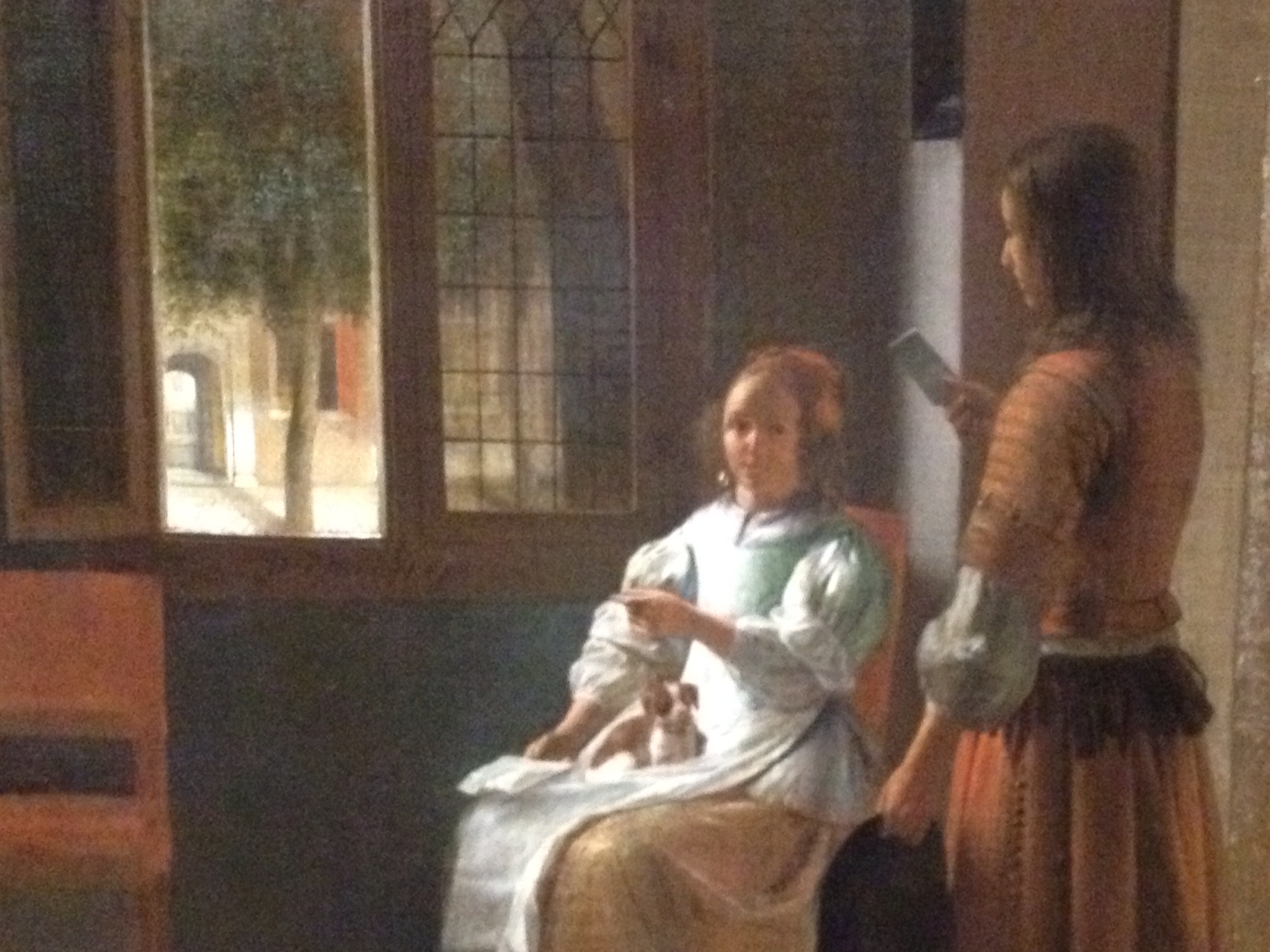 But I digress. You came here expecting a post about pizza, so let’s plough on.

“What would you like to do while you’re here?” Alan asked me on my first day. “There are several museums that we could…”

“I’d like to eat pizza. It’s for a very important commission.”

Alan suggested that we stretch the remit of National Pizza Week, by eating a Turkish pizza called Lahmacun. This is served in a restaurant called Bazar, on Albert Cuypstraat. The street also has a large open-air market, which might account for Bazar’s unusual architecture. Inside, it looked like an old corn exchange building: high-ceilinged, with an all-encompassing upstairs gallery that overlooked the ground floor.

Update: It’s actually a converted synagogue. My thanks to Alan for his research. 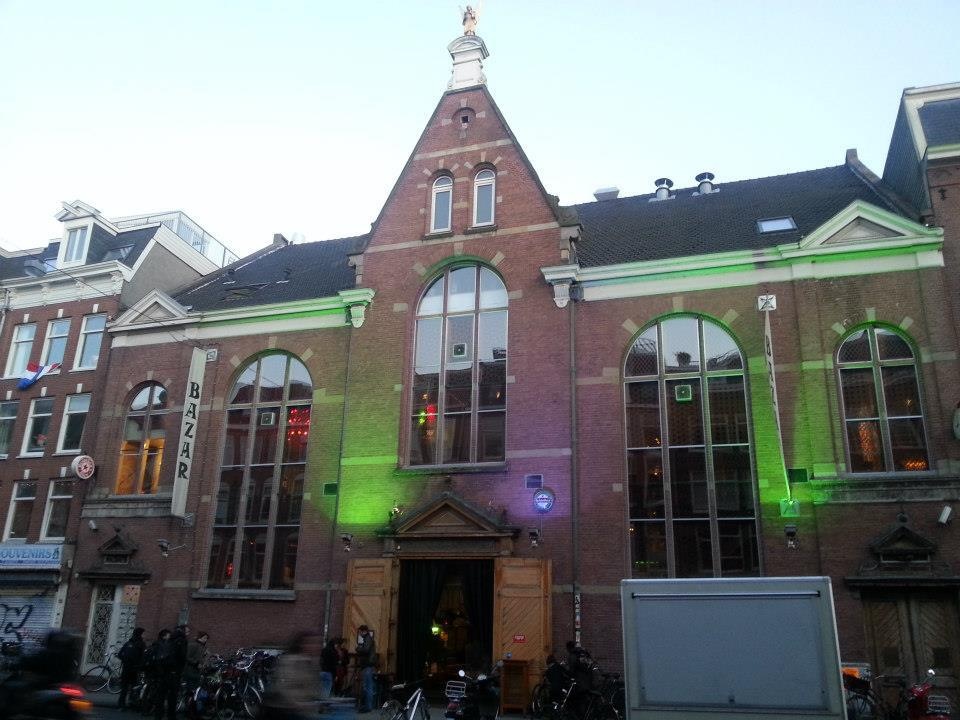 We sat upstairs, beneath an amazing tiled wall that stretched all the way up to the vaults. You’ll see a bit of this wall further down, but before you do, take a look at the wall on the opposite side. 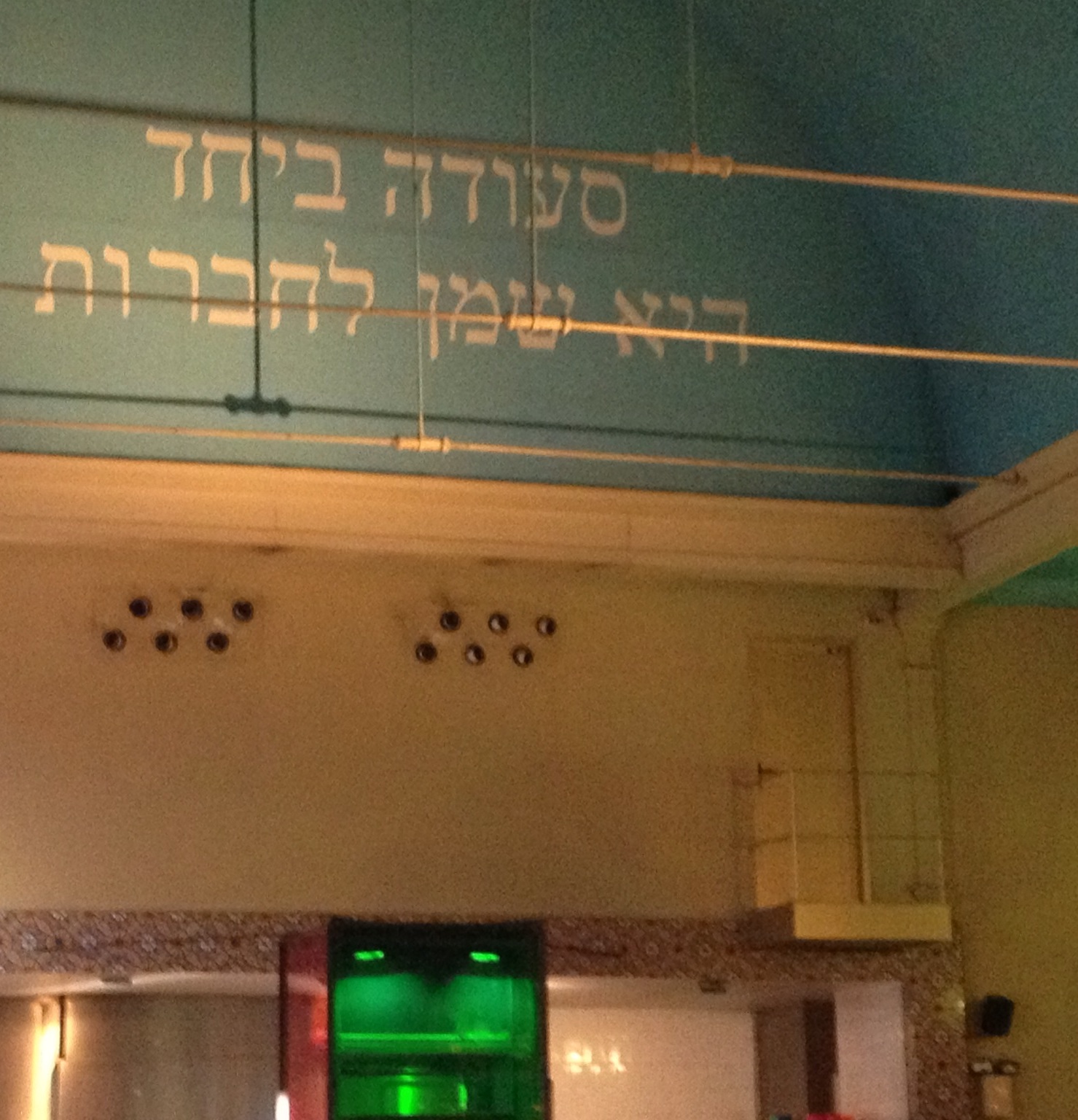 a) What does that inscription say? Is it in Hebrew? I’m not good with alphabets.

Update: Alan and Sevitz have confirmed that this is Hebrew. A literal translation: “Eating together is a friendship lubricant”. As Alan says:

I can only assume that it’s a recent addtion and not a remnant from the restaurant’s synagogue past.

b) What is that door for, way up at the top of the building, with its little balcony? Its function eluded us.

c) The illuminated green glass is actually the top of a massive dumb waiter, which connects the upper and lower kitchens. Again, its function was called into question, as all dishes were manually carried upstairs on gigantic metal platters. 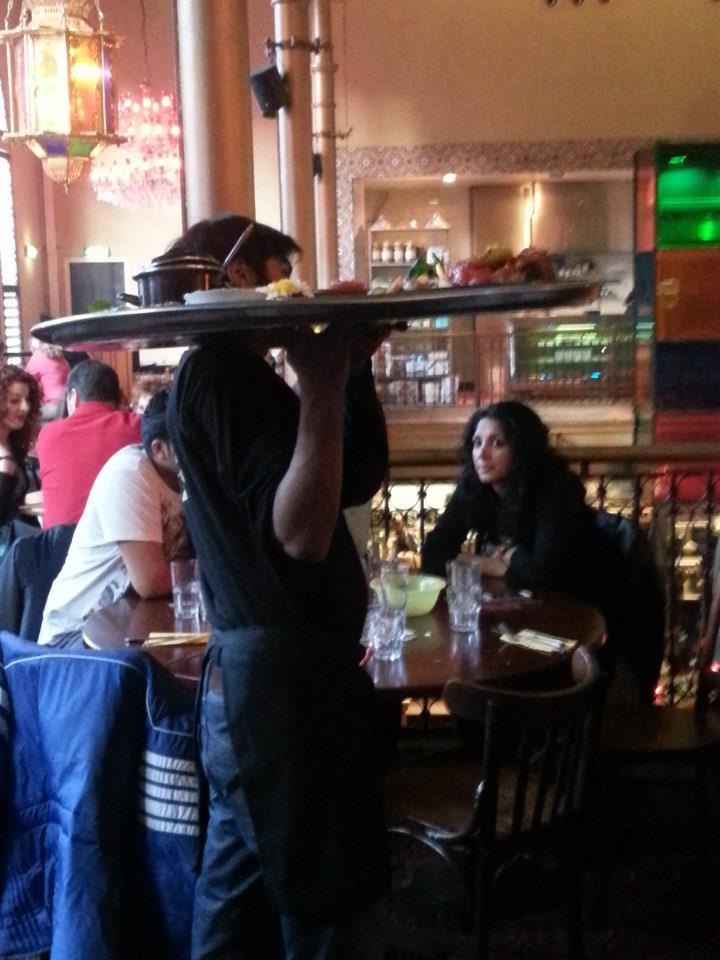 My Lahmacun was listed on the “Lunch Dishes” section of the English menu and the “Small Dishes” section of the Dutch menu, so I ordered it as a starter. Any worries that I’d podge out before the main course were obliterated by the slow service, the forty-five minute gap between my Lahmacun and my Yogurtlu Adana giving me ample time to rebuild an appetite. Perhaps the staff had thoughtfully factored this in. Well, that’s the charitable explanation.

Here is my Lahmacun. I was going to order it with the optional extra of cheese, but forgot. 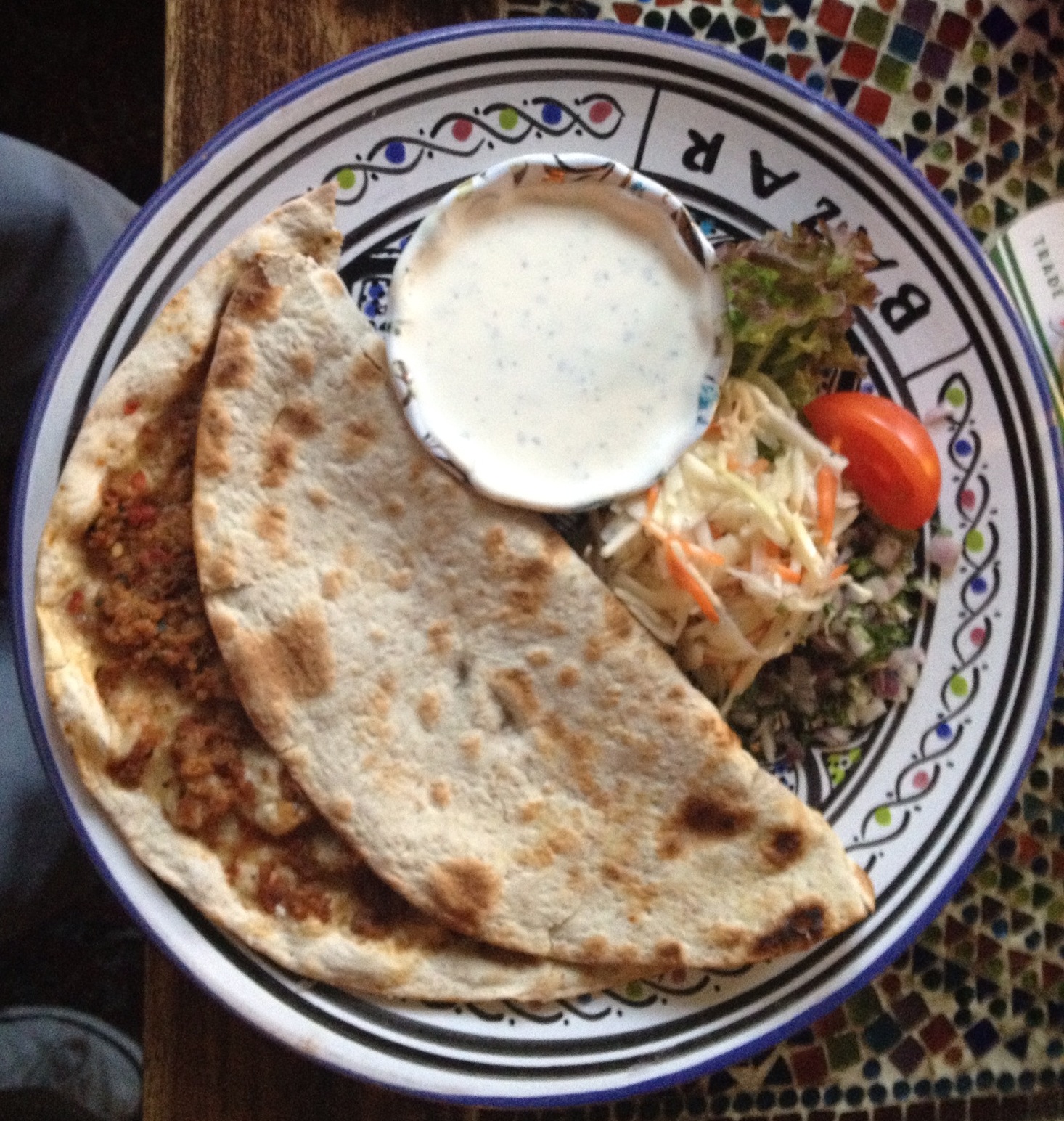 It doesn’t look much like a pizza, does it?

Once opened, its pizza-ness does become more apparent. Its closet cousin is probably the calzone, which is also served folded. 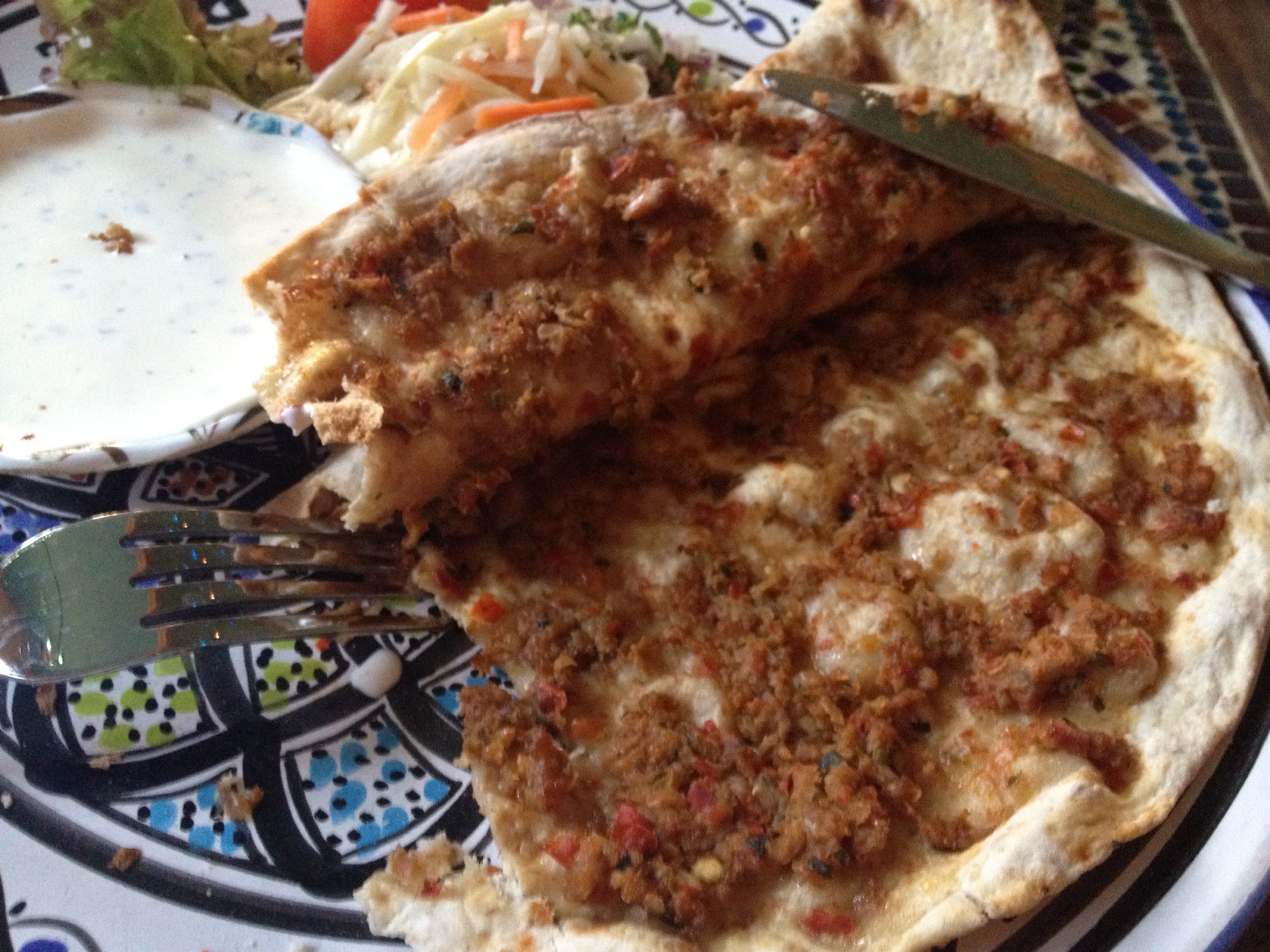 The filling consists of minced veal, which I wouldn’t normally order, but there were no alternative fillings. The yoghurt dip was an awkward presence, as it had too much of a cooling effect on the already lukewarm dish. I used it sparingly. Meanwhile, a side salad provided the sensation of cheese.

I’m no food critic, so suffice it to say that I enjoyed my Lahmacun. Look at the lovely tiles! 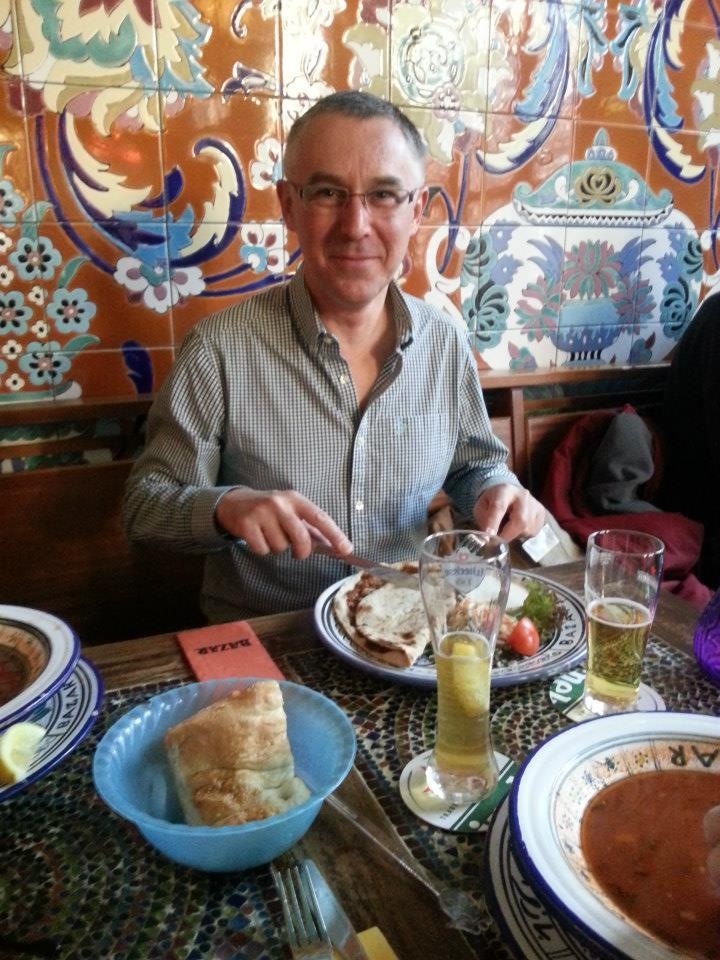 13 thoughts on “Turkish Pizza in Amsterdam”