Here I would put a caveat about spoilers for anyone still reading but, oh dear, why bother? It’s been two months since we last convened on the subject of Donna Tartt’s sprawling novel, you’ve finished it and probably three other books besides. I have an absent note from, I don’t know, FROM ZEUS HIMSELF, OKAY? Only don’t look too closely at it lest it become obvious that I had Stuart forge the signature. Just throw it on the fire. Shut the door. Have a seat. Let us begin.

When we last left our hero, his father had rather inconveniently walked back in the door just as the Family Barbour welcomed him to join them at their country house in Maine for the summer, and possibly forever. “They’ve grown quite fond of you — Mother, especially. I believe they may want to keep you,” Andy tells Theo at the end of Book One, right before Larry and Xandra with an X step callously back into his life.

Book Two is just a few hundred pages, set in the unfinished housing community where Larry has landed and from where he’s making his dubious money gambling in Vegas. It’s here, under the merciless desert sun, that we meet Boris. O! Boris! Surely I’m not alone in naming him my favorite, but particularly I love what a paradox he is — cheerfully violent but with his own fully realized pirate code, full of love and philosophy but also rage and ignorance, fussily domestic in some ways while destructive to the point of anarchy in others. 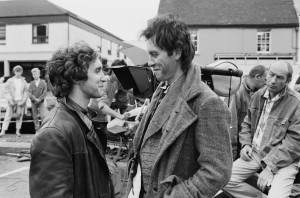 Don’t tell me you can’t see it, just a little bit of the raucous Withnail and I energy in the adolescent madness of Boris and his sidekick Potter?

Boris immediately bestows upon Theo the nickname “Potter” because of his fish-out-of-water resemblance to Harry Potter — orphanhood foreshadowed here! — and they become life partners in a way that so captures the dizzying magnetic bond of hyperfriendship at that age. (Does anyone else see a young Richard E Grant when they picture Boris? Something about a chest so scrawny it’s concave, and always looking like he needs just one more bath …)

Theo spirals into drugs and booze, at first rather headily and illicitly, but then with a gimlet-eyed escapism that will take us through the rest of the book. And then, with a suddenness that mirrors his mother’s death (although there the similarities end), Theo’s father is dead and the last vestiges of normality for Theo die with him. Having tentatively handed a tiny bit of his heart to his father only to have it, too, extinguished, Theo is pretty much done with Vegas and with his own optimism — he picks up Popchik and skips town with the stoned determination of a refugee.

After crawling back east by bus with the dog in a tote bag, now untethered completely from normal adolescence, Theo does not return to the sumptuous cradle of the Barbours but rather to the Shop-Behind-the-Shop of Hobie’s, who becomes his temporary and then permanent guardian. He trudges through the requirements of adolescence — Stuyvesant, if I recall correctly, as his high school of choice, which makes perfect sense to the New Yorker in me — but they’re all a shadow play for him, because our hero is becoming our antihero.

Here, at the end of Book Three, we see the last moment where Theo teeters on the knife edge of morality, where he stops pretending he’s not keeping the painting forever, obsessively unable to let it go, a golem created out of wood and oil for his protection but also a thumping tell-tale heart under the floorboards, all at the same time. Terrified of discovery, of implicating Hobie, he takes The Goldfinch from another erstwhile, pillow-case-wrapped hiding place and he it in an art and antiques warehouse. He well and truly has stolen it now, hasn’t he?

Some thoughts on Books Two and Three, before we skip ahead eight years to the tumult ahead:

SO! Start chattering, chattering classes. What did you think of our boomerang sojourn in Vegas, and our Beloved Boris?

[Ed. note: I swear to all the gods of words spoken and written, I will not make you guys wait two more months for the culmination of this Book Club. In fact, I started rushing ahead in my synopsis and evaluation of Book Four, so it’s saved in a draft for next week already inside the shadowy depths of Uborka. Onward!]