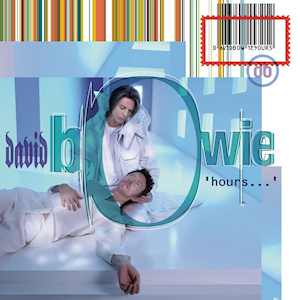 Summer holidays have meant that I’ve been in the car a bit less than usual, hence why this review has taken more than 2 months to appear. But I’m definitely not going to abandon this project, not when I’m so close to completion. We can do this.

I’m terribly unenamoured with Thursday’s Child. For one thing, it seems to be a fairly bland ballad, but my main problem is that the tune seems to be a bit random. For the first few dozen listens, it seemed like there was no direction to it, and it also felt like Bowie’s vocals were struggling to keep up, like each chord caught him by surprise, and the vocal melody was being made up on the fly, trying to adapt to a continually unexpected course. The bass seems to be the only thing valiantly trying to make the whole thing sound like a coherent song. It reminds me of when I was younger and I experimented with writing songs by just jotting down a list of chords without knowing how it was going to sound. It’s as if the challenge was to write a song that used a chord sequence that had never been used before. With repeated listens, it’s not quite as discomforting as at first, but it still doesn’t sound entirely deliberate. And even if you leave all that behind, it’s still a sappy ballad.

Something In The Air is cool though. As is so often the case with Bowie, the vocals get a special treatment, that makes them sound like a really low-bitrate MP3 or something. And then there’s a glorious soaring chorus. The latter parts remind me of “New York, I Love You but You’re Bringing Me Down” by LCD Soundsystem, I think that it must use a similar descending chord pattern, amongst other such similar qualities.

Track three is Survive with elements that are somewhat reminiscent of Bowie’s very earliest albums whilst also having a great deal in common with one of the Foo Fighters’ acoustic numbers. In fact, if you were to tell me that the Foo Fighters had done a cover version of this, I’d be utterly unsurprised.

I’m struggling to figure out how to describe If I’m Dreaming My Life. It’s quite sparse and unhurried, for the most part, a mid-tempo very ’90s style rock song. And then 4 minutes in it grinds to a halt, before clumsily, slowly stumbling back into existence before a protracted fade-out. S’okay, I suppose.

I’m forever going to remember Seven for a particular event. It was the day that Karen’s step-dad died, and we were in the car to head up to look after her mum for the weekend. Once we were on the road, I thought to put on some music, and this song came up straight away. Seven days to live my life, or seven ways to die. Not that there’s a specific relevance, but when you put on the radio to make you forget about the whole mortality thing, and the radio says “no, you don’t get off that lightly”, it’s a coincidence that’s hard to ignore.

What’s Really Happening? was borne of an experiment, wherein Bowie decided to invite his fans to write the lyrics for a song, as a sort of online competition. Unsurprisingly, he didn’t do it again. It’s interesting only for its novelty, as a song it’s quite unremarkable, and the looping bassline does start to grate a bit.

Huuuuuuge fan I am of The Pretty Things Are Going To Hell, it’s a real stonker of a punk song. The verse chugs along on two chords, and so when the chorus finally erupts into existence there’s a real sense of an event. There’s a simplicity to it all, but that’s the nature of the genre.

New Angels Of Promise, by contrast, is far more complex. It’s got a fairly airy, spacious verse (I like how his voice breaks on the word “edge” in the line “take us to the edge of time”) with a peculiarly sometimes-monotonous backing vocal track that lends a sort of dark sinisterness to the whole thing. The chorus is a bit more dense, but still pulls back before you feel like it completely gets going.

The penultimate song, Brilliant Adventure seems to be nothing more than some plinky plonky eastern-sounding filler for a couple of minutes. Some fairly easy-on-the-ear harmonies in there though.

And finally The Dreamers which sounds like a song from one of those musicals based on the songs of Queen or Abba or some such. It’s all dramatic ’80s synth and warbling vocals. Doesn’t really lob any surprises at you, but it has a certain grandeur to it. Ends somewhat abruptl

Hits from this album: Thursday’s Child did the best of them, with Survive, Seven and The Pretty Things Are Going To Hell not doing so great.

My favourite song from this album: For me, it has to be The Pretty Things Are Going To Hell.