The news that there’d be a new Bowie album out in January meant that it made sense to take my time over this one, so that I’d be able to append Blackstar to the end of the project without a huge waiting period. 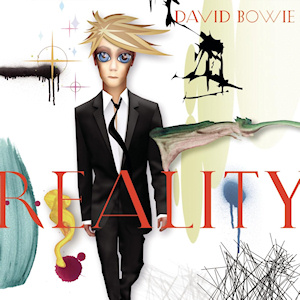 This is another album that I am quite familiar with already, so you won’t be surprised to read lots of glowing words about it.

New Killer Star is a magnificent album opener, and the bass really is the focus of attention in this song, you could feasibly take out every other instrument and it would still be recognisable. In the verse it’s gritty and compelling and low, clean walking lines in the bridge, and then back to the throaty dirtiness for the chorus. As always, the lyrics are deliberately obtuse, but the “great white scar over Battery Park” is surely a reference to the gap where the World Trade Centre once stood.

Next up is a cover of The Modern Lovers’ Pablo Picasso from 1976. As always with his covers, I like to compare them to the original to see what he’s done, and in this case it’s definitely an improvement, taking a monotonous dirge that sounds like something a teenage garage band would play, and making it listenable. Well, nearly. I still don’t like it much. I guess you can’t polish a turd.

Never Get Old has lots of little sonic details that I find interesting, it’s definitely not a case of just throw some lyrics over a chord sequence and call it done. It also introduces one of the underlying themes to this album, which is Bowie challenging the stereotype of the ageing rock star. Whereas in his younger years he’d seen getting old as something to be ashamed of, he now realises that it’s all a question of attitude, and he doesn’t have to stop being who he wants to be just to conform to the record-buying public’s preconceptions.

I generally don’t pay too much attention to The Loneliest Guy, it’s very downbeat and feels a bit out of place here. You wonder whether the character in the song (I’m pretty sure it’s not autobiographical) genuinely considers himself to be lucky despite his loneliness, or is in denial.

Looking For Water is a song about which I’m in two minds – I love some of the ideas, the bassline is sterling, but the whole song really does suffer from a lack of dynamics. It just sits on the same chords at the same level of intensity pretty much throughout, which makes it hard for me to enjoy.

Next up is She’ll Drive The Big Car which starts with a bit of harmonica, not something you hear a lot of on Bowie songs! This song has so much going for it, it’s hard to know where to start. Let’s start with the lyrics – while it’s not without its ambiguities, it’s not hard to tell that this is a song about a woman (a “husband’s quiet devoted wife”) driving in a southerly direction along Riverside Drive in Manhattan (you can even follow her route at home!) listening to the radio (“find a station playing sad, sad soul”), reflecting on how her husband has disappointed her by shackling her up at home (“he promised her a dream-life, he’d take her back to street-life”) and getting fairly cross about it (“just a little bit faster now, just a little bit louder now, just a little bit angry now”). Perhaps her daughter in the back seat (“she’ll keep an eye on Jessica”) is the only thing that stops her from doing something rash, who knows. I like something I can understand. Moving on to other facets, the vocal harmonies in this song are lush and swelling, it’s hard to communicate just how much they contribute. And the more you listen to the song, the more you hear tiny little details scattered here and there, little melodic touches that go overlooked at first. It would be easy for a song with this much going on to sound cluttered and busy, but it doesn’t, it just sounds like it’s awash with ideas.

Days is another of my favourites, but for different reasons. It’s mellow and wistful, but still with enough energy and direction to make it interesting. Lyrically it’s slightly disconcerting, the “character” here is apparently a selfish person, a leech who has the cheek to still ask for more. The theme seems to be at odds with the nature of the music, but hey ho, wouldn’t be the first time that Bowie’s pulled that trick on us.

A song that has always puzzled me is next, Fall Dog Bombs The Moon. Never figured out what the fuck this is about. It’s a very rough-sounding song, as if it’s been just lazily thrown together and prematurely declared finished. I guess that has to be intentional, but I have yet to penetrate its sloppy surface and uncover why it exists.

Conversely, Try Some, Buy Some is fairly easy to interpret – the message here is that drugs are no substitute for love. Which is fine, for those of us who have access to both, but I guess sometimes you don’t get the choice. This song was originally written by George Harrison and originally performed by Ronnie Spector. Whereas sometimes Bowie takes a fairly crap song and gives it life, in this case he’s left it pretty much alone, though I’d say that his vocal performance feels like it has a bit more sincerity to it.

The penultimate track is the title track, Reality. It’s fast and intense, with a very “Ampeggy” bass sound (bass players will know what I mean). It’s another defiant song in which he states, and proves, that he’s not planning on going quietly into retirement. Like so many of the songs on the later albums, it’s tight and succinct, over before you know it, rather than stretching out beyond its welcome.

Now, I’ve often had words to say about the songs that Bowie chooses as an album closer. For many years, we thought that Reality was going to be his last album, and if that had come to pass, then he couldn’t have chosen a better closing song than Bring Me The Disco King. It’s spectacular, with lyrical content and a piano-driven musical arrangement that both combine to form a stark, moody atmosphere, a spotlit performer in the middle of a stage at an intimate club. It’s a song that he’d been working on for a decade, and was originally recorded for Black Tie White Noise, but it didn’t make the cut. It wasn’t until he stripped it down and slowed it down that it finally clicked. His vocal performance is also worthy of note, bursting from the speakers as if it’s being torn directly from his innards. The last 90 seconds or so are then left entirely to the instruments, the drums and piano playing us out, the singer already having left the building.

Hits from this album: New Killer Star, Pablo Picasso and Never Get Old were released as singles, though to describe them as “hits” would be pushing it.

My favourite song from this album: Definitely Bring Me The Disco King, it’s sublime.

Next up: The Next Day