Back in February, out of curiosity, I decided to try almond milk on my cereal instead of regular old cow’s milk. Though strange at first, Karen and I have quite grown to like it, and since then we’ve bought a carton nearly every week. The range of different varieties is broad, and I don’t think we’ve ever had the same product twice.

However, our latest purchase is actually the same one that kicked this whole experiment off. Which made me think “hmmm, if I’d been reviewing these almond milks as I went along, then that would have been a really good project for the blog.” Well, you know what they say, the best time to plant a tree is twenty years ago, and the second best time is now. 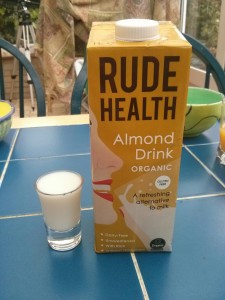 Flavour: a strong flavour of almonds in this one. As I mentioned, this was the first almond milk that I tried back in February, and I found it to be initially overwhelming. It made me wonder if I had made a big mistake, and this whole almond milk idea was a folly, but by the end of the carton I was definitely coming around.

Mouthfeel: very pleasant, very milky, not too thick, not too thin. This one is thickened with rice (14%) and contains 1% almonds.

Sweetness: nothing is added, but the rice content does lend it a certain natural sweetness.

Conclusion: I rate this one quite highly. Once I got over the initial almondiness, I started to enjoy the boldness of the flavour. However, it’s also very ricy, which doesn’t work in its favour.