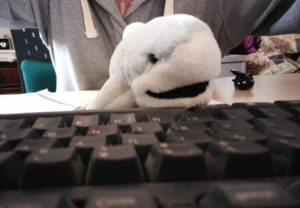 Your favourite shark, in the flesh

Hey there shark fans! Long time no see! Bet you thought I’d died or something, but no! I’ve been around, doing my thing.

A kilogram bag of green coffee beans somehow found it’s way into my possession. Don’t ask me how, because that would put both of us in an awkward situation, dig? I figured, let’s roast some of these little babies up.

Step one, you’ll need the oven nice and hot, so get that going. 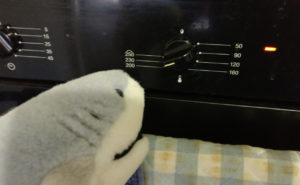 Crank it up to max, humans!

Meanwhile, you want to spread your green coffee beans onto a baking tray. One layer thick, don’t want any piles around here. This doesn’t take too long, so that buys you some time for swimming around in the ocean and terrorising bathers while you wait for the oven to finish heating up. 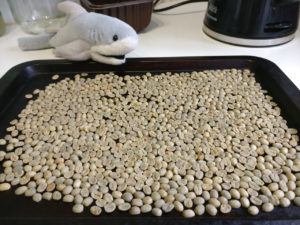 Look at these little green guys, they’ve got no fucking idea what’s about to happen

Once the oven hits about 200 you’ll probably be bored of waiting so you’ll bung them in there anyway. 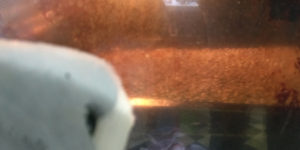 They’ll sit there for a while, turning yellow, and then after about ten minutes they’ll start to act like popcorn, all jumping about and making a damn noise all over the place. This is what’s known in the business as “first crack”, and if you want a nice light roast then you can take these out now, if you like, and call them done.

It’s likely that the ones round the edges will cook a little faster than the ones in the middle, so you might want to open the oven and give them a little swizz around. Be warned, they’re pretty smoky, so make sure your kitchen is ready for this.

Once they’ve turned a nice colour, dark but not black, take them out. Now at this point you’ve got two things to think about – for one, you want to cool these little guys down, so that they stop roasting. Also, they’ve got a sort of flaky coating, which we want rid of. To address both issues, blowing on them is the solution. After a couple of good puffs you’ll realise that this flaky coating is going everywhere, so you’ll come up with the brilliant idea of taking them outside and doing it there. 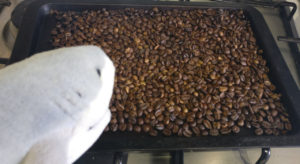 Now you want to let these guys rest in a loosely closed container for a few hours, cos they’re puffing out CO2 and its good to let them get it out of their system. Once that’s done, seal them up, and they’re officially ready for the morning.

Catch you around, shark fans! 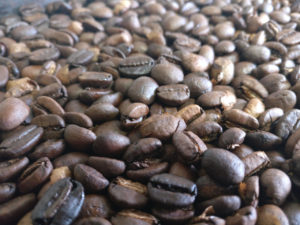 Oh heck yes this is what I’m talking about

2 thoughts on “Roast With Ewan”