Back in October Pete and I went out for dinner one night when my mum was staying. We went to a nice place we’ve been to before, called Valpy Street in Reading. It is an odd underground place that feels both crowded and cosy, but not uncomfortable. He spent much of the meal talking over whether to continue going to his archery club or not. When he eventually paused for a moment, I mentioned that there was another decision I wanted to talk about with him, and he said, are you going to propose? 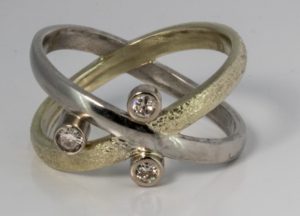 I’d been following the Campaign for Equal Civil Partnerships for some time, and it had finally reached the point where we knew it was going to happen. There are many reasons why a civil partnership feels like a better fit for us than a marriage, not least the increasingly feminist view that we have of the world. More on that later. Having known and loved Pete for nearly 17 years now, I was confident that he would agree that it’s the right thing at the right time, so yes, I was going to propose. In fact, so confident was I, that I’d already ordered a ring redesigned out of my two ex-wedding rings and the diamonds from my mum’s engagement ring. If he had inexplicably turned round and said no to my suggestion, I’d still be wearing it, because I really like it.

The next step in our process was to figure out what it might look like. Big dress big cake big party? Doesn’t feel very us, and we’ve got four divorced parents to manage. Small bespoke do on a narrowboat? Even more of a parent-management issue. Do it all online? Seemed like a daft idea at the time. We made a list of everything we could think of to do with weddings, then crossed out the things we didn’t fancy; ice sculpture out, vintage cars in. Eventually we made a rule: if the idea doesn’t fill us with joy, then we won’t do it. We settled on a small signing in the registry office with two witnesses (Bernard and Pete’s sister), then a road trip round the country to go out for a celebratory meal with small family parties. Then maybe some sort of friend do in a pub at a later date if we feel like it. The road trip to include two nights where Bernard stays with grandparents, and we get a two night “honeymoon” at a fancy hotel in Grasmere.

A date was set, and then we had to wait for the registry office to give us the go ahead. I was in Manchester for work when they called me to confirm the date and tell us when we would need to go in for our pre-signing appointment. At this point they threw me a massive curve ball: Pete and I share the same surname, because when I was pregnant with Bernard, I did a deed poll. The deed poll hasn’t been lodged with a court, because it doesn’t have to be. It’s been used successfully to change my surname on bank accounts, passports etc. But for the purposes of a civil partnership, according to the registrar, it wasn’t good enough. We would have to use the words “Also known as [former married surname]” on the paperwork. This did not sit well with me.

I gave it some thought, and then wrote a strongly worded email, pointing out that since it is impossible for me to change my surname from [former married name] to anything else, as I have no ID in that name, I can’t possibly be considered “Also known as” that name. I was all ready for a fight, but they caved immediately, so a couple of sleepless nights for nothing there. Fucking patriarchy. 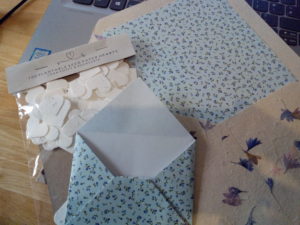 The date we have been looking forward to is 22nd May. Gorgeous Lori sorted me out with a dress; other costuming arrangements remained a bit vague. Actual pretty invitations were sent out! Guests were invited to contribute songs to the Wedding Road Trip Playlist. All we had to do was count the days down, which we didn’t actually do because it’s not that exciting.

And now what? Last week I paid a fee to rearrange to the earliest possible date, which would have been 3rd April. Last night Boris banned weddings. And yes, as plenty of people have told me, it’s only deferred to some unknown point in the future when we can celebrate and be happy, which rather undermines my genuine disappointment at not being able to do this nice thing when we expected to; as well as my genuine concern at Pete and I not being legally next of kin; and the fact is we’re as happy as one can be in these circumstances and signing a bit of paper isn’t going to make us more so. It was just a nice set of events that we were looking forward to, which now has to be rearranged in its entirety.