This month’s selection box from AFBeerClub contains eight alcohol-free beers, all of which I have never had before! Here’s the first four of them: 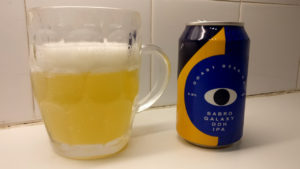 This beer felt quite viscous as it poured from the can. You can see it has a very good creamy head and is a very cloudy straw colour. The aroma is bold, hoppy, sour and fruity. The flavour is quite unconventional, like some sort of unfamiliar exotic fruit with a chunky savouriness to it. 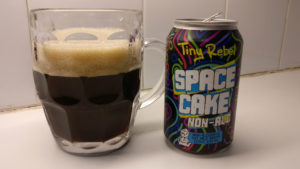 Even before I’d opened the can, I had high hopes for this. “Oat Milk Mocha Stout” is the kind of thing that’s right up my alley, and “Space Cake” is a fantastic name. That said, I’ve been finding that, among all the various genres of beers, the stouts are the ones that seem to struggle most with the transition to non-alcoholic.

The beer pours very thick out of the can, which is a great start. I wasn’t completely taken by the aroma – it smells more like a brewery than like beer, which was a cause for some concern. But the flavour – oh gosh, the flavour – is absolute perfection. Oodles and oodles of chocolate and coffee in this one. This is exactly what I’m looking for, and I could gladly buy it in huge quantities and devour it in an orgy of syrupy delight, but my only concern is that it does contain real coffee, and I am doing the whole caffeine-free thing as well as the alcohol-free. 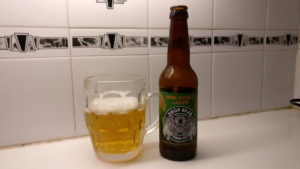 Looks like lager, pours like lager, smells sweet and honeyed, but ultimately, like lager. My initially feeling upon drinking it was that it was a bit underwhelming and lacklustre compared to what the smell had been implying. It’s got a bit of tanginess but is very fizzy and a little bit metallic. That said, my sentiments towards it did improve as I got used to the flavour, and by the end I was thinking “hmmmm, I could go for another of those.” 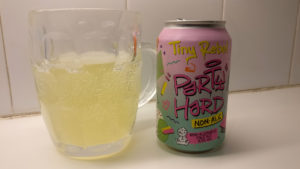 I was quite surprised by the colour of this when I poured it, it’s so pale as to be barely there at all. There’s absolutely no head whatsoever. It smells quite pleasing, very hoppy with a little hint of mango. It’s tangy and sour and on the very cusp of what I’d even think to classify as “beer”, but it goes down very nicely, and by the end of the glass I had to admit that I’d enjoyed drinking this as much as many of the other beers that I’ve put in the top set, so here we go, Tiny Rebel, have another one of these:

There’s still 4 more beers in the monthly box, so the reviews of those will be coming up in a couple of weeks.