I met Pete shortly before Easter in 2003. We fell head over heels in love, as you know, and wanted to spend every minute of every day with each other, despite living 2 hours’ drive apart. We immediately implemented plans to spend every weekend together, with the notable exception of Easter that year. I was a little surprised; in my family Easter isn’t really celebrated unless we happen to be together in which case we might give each other last-minute-bought cheap chocolate. My Great Aunt doesn’t even send religious cards to us anymore. The following weekend, Pete referred to some stupidly expensive present he had been given for Easter. Presents for Easter, I thought. How odd. 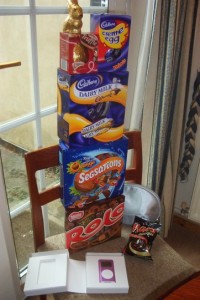 Fast forward: Easter 2004. I am invited to join the clan at a swanky hotel in Ipswich, overlooking the marina. I make sure to buy my cheap chocolate in plenty of time. All seems like a fairly normal weekend away, until after breakfast on Easter Sunday, when I am sent up to the in-laws’ room where “nests” have been laid out for each of us. These are filled with chocolate eggs, small yellow chicks, and gifts. Quite serious gifts, but check out Easter 2005, by which time I was really part of the family.

As Pete and his sister became more independent, and the size of the family increased, it felt necessary for all of us to contribute more. Up to this point, Pete’s mother had insisted that Easter was her thing, and she didn’t want us to give her presents or chocolate, but she did not get her way, and the nests got bigger and bigger. The sheer quantity of chocolate was such that we would still be eating it in August. And on the arrival of Bernard, we had all his to eat as well. It was just too much. 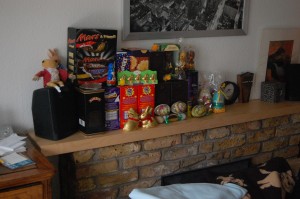 Last year, worried that it was getting a bit expensive for everyone, I suggested a sort of Secret Santa arrangement, which was hastily renamed the Eggsellent Easter Exchange, a name that I notice was not used at all this year. Pete wrote a little programme that randomly allocates each of us one person to buy for, and emailed them the news. One of us also gets to ‘help’ Bernard buy someone a present. We set a spending limit, and everyone gets very excited about all the secrecy. I think we’ve found that we put more thought into what we’re buying for our one person. The nests seem to be piled higher than ever with chocolate, and more of it is Belgian, but the presents feel that much more special. Pete and I still end up eating the majority of Bernard’s chocolate.

Our family Easter also includes an Easter egg hunt around the house (yay, more chocolate!), a roast dinner, and a failed intention of going for a walk. There’s no spiritual or religious element whatsoever, but it’s a really important family festival and we’d sooner miss out Christmas. The bonus there, of course, is that we have to share our Christmases with the other branches of the family, whereas none of my extended family is remotely interested in Easter. Result! 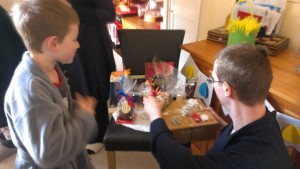