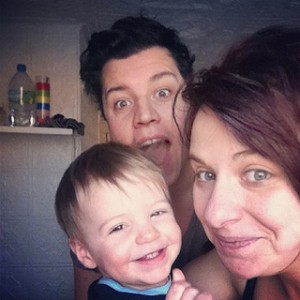 I think you would recognise me, but only if you had ever met me before or seen a picture. Otherwise probably not.

I think this is a very important question that I feel unqualified to answer. I know that for me, while it has basically been the death of me saving ideas to write in blog posts (or, in fact to have any ideas at all longer than 140 characters), twitter has been the most important. I do understand why some people are dismissive of it, but it’s been nothing but good for me, in terms of keeping in contact with friends, keeping sane during long nights with a new baby, and just generally feeling part of a larger, friendlier, simpler conversation. Other than that. Um. Smartphones? I suppose my iphone enables all of the above, and more.

I do. And I keep trying to post on it. And I succeed. Sometimes. But possibly on a monthly rather than the daily basis it once was. In turns of writing I’m mainly present in lots of other places – that’s also part of the issue. When I started writing for a living (in… um… 2007? Christ) I found it increasingly difficult to turn off whatever voice I was having to write in that day, stop thinking laterally about things and just let my brain move in squiggly lines again. I desperately want to get that back, and harbour a belief that at some point I will make myself be able to carve a blog-shaped hole in the day and do it daily once more. I know that the community has shifted, that people read in different ways, and that if I don’t learn to say ‘no’ to work things, I’m never going to learn to make time: but still. I will, damnit. The blog was written. The blog exists. The blog will rise again.

A: that I managed to turn a ridiculous blog into an even more ridiculous (but quite successful, at the moment) career.

2: that I managed to remain in touch with so many of the people I got to know through blogging, many of whom I consider among my closest and most trusted friends. All of whom I would be happy to meet for a pint. It is very unusual (for me, at least) to remain close to that disparate a group of people for so long. Being part of that kind of community also changed the way I approach conversations and people on the internet in general, which has been all for the good. So thanks, you lot.

C: I created a human with my internet boyfriend (of ten years, now, I think my mother may have stopped calling him that by now). And that small person, if you’ll excuse my language, is fucking astounding. It is something I wasn’t sure we would ever do, and had decided to be ok with that, and then we suddenly, surprisingly did, and I am so, so glad.

Sevitz wanted us to interrogate you about various things, so here goes:

I … I don’t know. Pretty much everything? On both sides of that. I feel honestly confused about why anyone would not live near water. Like, I logically realise that people might like hills and things, but just have a complete disconnect with the idea of not being able to get to the sea, or a lake, or a bloody big river within 20 minutes. The programme ‘Escape to the Country’ makes me apoplectic with rage for this reason. I am quite aware that’s unreasonable.

As for the things that I think are reasonable that other people don’t? I really don’t know. I find them reasonable, so find it hard. The idea that text messages fly through the air and that if you’re on the right physical height you can hear them whispering as they whizz past? Um. The idea of, when someone asks you what you want for your birthday, suggesting a book you already own and are currently enjoying, and then giving it to them so they can wrap it up for you? Bobbie’s had to get used to having his favourite possessions wrapped up for birthdays and christmas. But then, what better to get someone than something you’re already sure they like?

I honestly don’t know how to answer this question. And like most things I don’t know about, I’ve just written 400 words on the subject. I was a journalist for a bit, don’t you know.

What do you think Bobbie would say changed the most about you when Doozer was born?

I didn’t know, so I asked him. In fact, I knew what I *thought* he would say changed about me most the moment Doozer was born, because he is a pedant. And that was something about externalising a baby. But he didn’t. He said this (I am typing as he speaks):

And what do you think changed the most about Bobbie, when he became a dad?

Very little. He turned out to be precisely the same grounded, loving, generous, relaxed, inventive and attentive father that I always knew he would be. Just even more so.

I would say (on the negative side, because not all parenting is wonderful, obvs) that I also realised for the first time how much we’re both affected by lack of sleep. Both of us. It is a terrible mix with new parenthood. When we don’t sleep, neither of us have any rationality, or patience, and a huge capacity to do shouting and crying. We are now, as a family, more dedicated to the art of sleeping.

Hm. I think Diamond Geezer, if that would be alright. I have such huge respect for him, and gratitude that his is still the only blog I get to read almost every day. I would like to ask him how, after all these years, he still has such boundless energy for his blog. And what he considers the ‘Golden Era’ of his blog? And why anyone with any sense would ever decide to live more than a mile from the sea?

10 thoughts on “Where Are They Now? An interview with Anna Pickard”