Your views on the resurgence of vinyl vs mp3 culture, please.

It’s both curious and challenging that you’ve limited the question to vinyl versus MP3, David. To illustrate the challenge, these are my primary modes of listening, in descending order of frequency.

1. Streaming. Mostly Spotify, then Soundcloud, then YouTube, then Bandcamp.

2. CD. Usually bought from a bricks-and-mortar shop, which means Fopp in Nottingham.

3. MP3. I’m not a big iTunes or Bandcamp buyer, and I only rip CDs when they’re not already on Spotify. I also stopped illegally downloading a long time ago.

4. Vinyl. There’s been a recent upsurge, as vinyl is in plentiful supply at our local independent, and as many Nottingham acts are now opting for vinyl over CD.

So, you’re basically asking me to compare and contrast my third and fourth choices. Hmm, OK then. 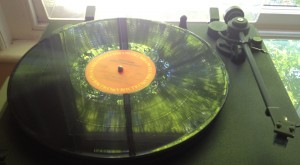 As regards the resurgence of vinyl, there’s something beautiful about the phenomenon, but there’s something suspect as well. At one end of the market, there’s a group of nostalgic middle-aged 6Music listeners, fetishising the format of their youth, in the arguably delusional belief that vinyl is somehow more “real” than other formats. This, I think, is a little silly. Good music is good music, regardless of format.

At the other end of the scale, there’s also a fresher, more youthful market for vinyl. Customers at the local independent skew younger than some might have expected, and many young bands seem keen to get a vinyl release out there, in preference to anything else. This can’t so readily be dismissed as a doomed attempt to recapture the wonder of long-lost adolescent passion.

Being middle-aged myself, I’ve been wary of getting caught up in all of this. But perhaps I can no longer dodge the slow realisation that, yes, new-release vinyl is a really rather beautiful thing. Firstly, there’s the sheer physical beauty of the object: high-quality artwork, legible credits and lyrics, the sleek surface of the record itself. Secondly, there’s a dramatic improvement in sound quality, compared to the shoddy, flimsy pressings of the format’s mass-marketed dying days (i.e. the late Eighties and early Nineties). Records are thicker and heavier, clicks and pops are minimal, and mastering is subtle and rich. At its best, new vinyl is ahead of CD on sound quality – and so it almost goes without saying that it trumps MP3, hands down.

Thirdly – and this is where I’ve struggled the hardest against self-suspicion – there’s something about the ritual of placing a record on a turntable which encourages closer listening. It somehow feels like a more conscious choice (“I really want to hear this” versus “let’s just bung something on”), and the sight of the needle on the record serves as a continuing reminder of that choice.

Is there even an “MP3 culture”, as the question suggests? There certainly used to be. Napster, Kazaa and Soulseek were founded on peer-to-peer sharing, and using them involved at least some measure of collective interaction. A few years later, a new culture formed around MP3 blogging. But I feel that a lot of that’s gone now. There’s no “culture” on the iTunes Store, and little sense that MP3 purchases are being lovingly curated. I hate to use the word “disposable” – that naff old pop-weary sneer – but noisy 79p jingles, over-compressed to sound “banging” on shitty speakers, just aren’t made to be cherished, are they?

I’m never going to be a massive born-again vinyl convert – after all, why pay a premium for lack of portability? – but on an emotional level that transcends rationality, I think I’ll always retain a little love. And, fuck it, so what if vinyl is retro-chic? At least it’s capable of being retro-chic.

18 thoughts on “Uborka’s Got Style: Question #2 for Mike TD”