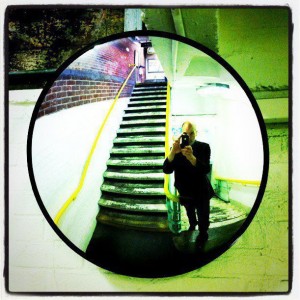 Still London. Back then I lived in its south-eastern suburbs, whereas currently I’m north of the river and more central. I’m enjoying this immersive experience of the capital, after 19 years of commuter and pseudo-commuter life.

Crows have wandered across my face, adding footnotes to my story. Some days I barely recognise my own reflection, with a greater number of “Who’s that old bloke?” moments each year. In general: yes, probably.

This is probably stretching the definition of “recent” beyond the limits implied by the question, but I feel I should avoid citing smartphones once more, purely for the sake of variety. So, a broader view: the internet.

We’ve witnessed and participated in a phase of history arguably as fascinating, disruptive and significant as the Industrial Revolution. May you live in interesting times, as the purported (and quite probably apocryphal) Chinese curse goes.

Hydragenic petered out towards the end of 2010. I rebooted it earlier this year, after finding myself writing an increasing number of wordy Facebook status updates that didn’t seem to ‘sit’ well in that environment.

I’ve been elsewhere too, both then and now, alongside the inevitable social media presences. A mixture of copy-writing, ghost-writing, anonymous, pseudonymous and credited involvement in a variety of creative and work-related projects.

Leaving my full-time job of sixteen years in 2006. It had become a comfort zone that was no longer comfortable. I’ve since done things that I neither could nor would have done previously, both professionally and personally.

This itchy period is best described as my mid-life crisis. I’m fine with that. Forget the English-speaking world’s typically alarmist, risk-averse implementation of the word; its Greek roots can simply mean “decision” or “turning point”.

Vaughan wanted us to ask you a few questions, and I hope he won’t mind that I have edited them slightly for the sake of brevity…

What kind of blogger (if any) did you think you were back then? And what about now?

I started blogging in earnest in 2002, with no particular aim other than addressing an insistently emerging need for some form of self-expression to counter-balance an increasing sense of personal unease and global unrest.

I’ve written about whatever I’ve felt it necessary to explore at the time. It has often been an exercise in self-discovery, frequently highlighting that the “Who am I?” question tends to breed only further questions.

Why do you keep disappearing? Is it do with your how your life is at that moment, or just because you haven’t found entirely the right medium for sharing your thoughts online?

I experiment with different outlets. There’s rarely a plan; stuff will out, wherever and whenever it needs to. There are also periods when I feel I’ve placed enough narratives and images into the world for a while.

From my perspective, of course, it’s not disappearance; simply an ongoing pattern of occasional shifts of focus towards different areas. It’s like an endlessly morphing Euler diagram. Trying to stage-manage it would be exhausting, so I don’t.

Has the easy availability of just about any music lessened its value for you?

Music seems as valuable as it ever was. Where forms of art are concerned, nothing moves me more, except occasionally the written word. However, I definitely listen to less music these days, since it’s always “on tap”.

I take it for granted, like the easy availability of clean, piped drinking water. That doesn’t mean I value it less. Like many others, I appear to grow carefree and careless; however, the fact remains that I still care.

Is there just too much music out there now?

I’ve floated this heretical thought myself, several times in recent years; its opposite too. The mixed blessing of increasing choice often encourages you to examine and to re-define how you relate to previously ‘scarcer’ phenomena.

I don’t think quantity is specifically a problem. The issue is more about how you address overload and fragmentation, particularly online. In my case, this has helped me to consider more precisely what I ‘want’ from music.

How many bands/artists would you say you get really excited about in an average year?

A decreasing number, since I reined in the insatiable yet largely disposable nature of my music habits. (Disclaimer: I wouldn’t recognise an “average year” if it slapped me across the face with a slab of 220 gram vinyl.)

Single digits, recently. Generally friends’ projects, rather than new music purely for novelty’s sake. It’s a different starting point – and level of engagement – when it springs from the basis of an existing relationship.

@goldfinsch, possibly formerly better known to many ‘Class Of 2004/05’ UK bloggers as qB of frizzyLogic. I’d like to hear her thoughts on: 1) pseudonyms and alter egos; 2) words versus pictures; 3) whither personal blogging?

Two of these are not direct questions; all three are admittedly very open-ended. They’re areas that we have debated regularly over the years. I’d be fascinated to see her sum up her current feelings in a mid-2013 snapshot.

9 thoughts on “Where are they now? An interview with Hydragenic”