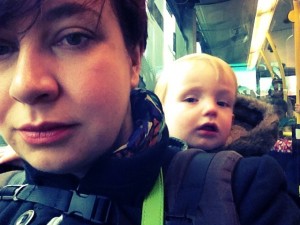 Not nearly. I started 2004 living in an amazing flat just off Holloway Road and ended it living in a cosy conversion in Alexandra Palace, where I stayed for 2005. In early 2006 I moved to an attic room in Archway which probably counts as my worst housing choice since moving to London. In late 2006 I met my now husband, then someone was shot almost on my doorstep and so in early 2007 I moved South of The River to Brixton to live with him. We lived in Brixton for 2 years before our lovely landlady decided to sell up, and we’ve been in the same house in East Dulwich ever since.

I would have said yes, but a few weeks ago, a colleague I don’t see very often asked me if I was a new starter, so possibly not, though it might depend how many times we’ve met in person, and when those times were.

For me, I think it’d have to be the iPhone (and the app store) – or applicable smartphone type thing. That I have a device in my pocket that allows me to read the internets, books, listen to music, watch films and television, have video calls with Scotland, or New Zealand or my husband while he’s in a car on a motorway (not driving it, obv), take and edit photographs, write blog posts and emails, track any exercise I might do, do my banking, play games, watch over my infant son via an infrared webcam and just actually send text messages and make phone calls is astonishing.

There are downsides to the ubiquity of these devices, and I definitely have to watch my usage of it when I’m at home and my attention should be elsewhere, but the opportunities afforded by these devices are amazing.

I’ve always had a blog, I just haven’t always written in it. Mostly, twitter ate my blog, or at least, life ate my time to blog and twitter came along around the same time and gave me a place to write in very short bursts. I probably average more words on twitter per day than I ever did at the height of my blogging.

I still, very occasionally, blog at pixeldiva where I restarted on a new wordpress install a couple of years ago, leaving all the archives of every previous blog unlinked, but still googleable.

I started blogging at betaparent earlier this year, well over a year after buying the domain name.

I also recently got access to blog at Medium but have had too much of the fear (or what I write being considered too shit for it) to actually write anything there.

I think that’s probably got to be @pixjunior.

That I got pregnant quite quickly, carried him to (beyond) term and have managed to nourish and nurture him into the strapping wee boy that he is a constant source of astonishment to me.

I know people have kids all the time, but I really didn’t think I could, or thought that if I tried, I’d wind up in dire straights health wise – or that he’d have health issues, so to have come through pregnancy and birth relatively ok (emergency c-section notwithstanding) and with a healthy child showing no signs of the kinds of issues I had (or @MrPixeldiva has) is, frankly, miraculous.

Rachel wanted us to ask you about a few things:

I’d like her to gnaw on the meaty and portentous subject of “blogging baby” from her own and the future Pix teenager’s perspective.

Hmm. This is something I thought long and hard about, pretty much since I got pregnant.

I wrote a fairly long thing about it recently, called On ‘Sharenting’ and Shame in response to a hideous article about parental oversharing, but in essence, I’ve been trying to strike an appropriate balance between being me and sharing my experience, keeping friends and family up to date and recording moments so that I can remember them later.

I do so in the knowledge that sometimes I’ll go the wrong side of too much information, but that some of it will be helpful, and am trying to make sure that nothing that I share could be used to shame him at some point in the future.

It’s an incredibly difficult line to walk, because I know that just by existing, I’ll be an embarrassment to future @pixteenager but I’m hoping that I can bring him up to be a thoughtful and compassionate boy, equipped to handle a world that increasingly lives life online, and frequently publicly.

Since I know she’s an avid adopter of the new I’d like to know which of the multifarious platforms and services have proved a keeper (if any) and if so what makes it/them worthy.

Twitter. Without a shadow of a doubt. If twitter didn’t exist, my life would be considerably poorer. It makes it easy for me to keep up to date (see: ambient intimacy, without which I’d neither know the term for what I’ve experienced using it, nor have been able to get to know the author of the term to the point where I could discuss work, childcare and parenting with her. I’d also not have the job I have without twitter, nor many people I now count as friends, so for all its faults, twitter is a definite keeper.

Instagram. When flickr got yahoo’d, instagram arrived to pick up the pieces. I have a slightly uneasier time of it now it’s owned by Faceache, but for ease of use, viewing and sharing, nothing matches it, and the community aspect has been lovely – a bit like the early days of flickr.

Facebook. I don’t really like it, and I don’t use it much, but I’m increasingly finding myself using it on a daily basis to keep up with a few people who don’t use twitter and/or instagram much.

Pocket. A place where I bookmark articles I really want to read and rarely have the time to go back and actually read. Some day, though…

Timehop. An app where each day it presents me with a rerun of my social media postings (twitter, facebook, instagram – and will now synch all old photos via dropbox, though I haven’t done this) of that day in years gone by. I’m particularly loving being reminded about those moments of @pixjunior’s early months which I shared online, and finding that seeing them becomes a kind of mental bookmark for other things. Not all of it is good (and there’s some real shit coming up), but the distance a year affords is interesting.

Squarespace. When MT died I went to wordpress, which got all nasty and bloaty and I couldn’t be arsed. Squarespace isn’t perfect, but has allowed me to get back to blogging quickly and easily, without a lot of writing html and css, and the designs aren’t shite, which satisfies my aesthetic sense.

I’m going to go with no. Not yet. I haven’t come into contact with the thing, but everything I’ve read about it hasn’t changed my instinctive *WRONG* feeling about it.

I’d like to interview Graybo, because I don’t think we’ve ever met, and I’m not sure why that is.

I’d like to ask him how he’s feeling (I notice his last updated mood on his website was in 2010, and I figure he can’t sigh for 3 years…)

and lastly, I’d like to ask him if he’s any idea why my outdoor hydrangea’s are growing like gangbusters, but my indoor one, though still living, hasn’t grown at all and seems to be stuck in some kind of suspended animation.

11 thoughts on “Where are they now? An interview with Pixeldiva”