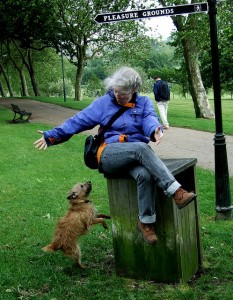 Yes. I’ve lived in the same house for more than 25 years. Except when I wasn’t in the country and couldn’t take the house with me, but that was all before 2004/5 anyway.

No. Well, maybe, if you know me well IRL. Few images associated with whatever my persona might have been at the time/s made their way into the public domain.

Hmmm. My most used techno thing since 2004/5 is probably my iPad. A loud scoffer at the idea pre-launch I was seduced the first time I ran a finger-tip across the thrillingly responsive surface of an early adopter. His tablet, of course. The best online thingy of recent years without a shadow of a doubt for me is ravelry. It combines my long-held knitting obsession with fabulous data geektasticness and there isn’t any necessity to interact with anyone else at all unless you want to. Which I generally don’t.

I do (www.twistedrib.co.uk), but am mostly an absentee blog-lady and my primary online presence is skype. That would be because of the inter-continental relationship. (We first met, allegedly, in Languagehat’s comments where, it is also alleged, I was extremely scathing. So it took a few years to get going. Had this initial encounter been in the Hydragenic discourse who knows what might have happened.)

Probably still being alive. Repeated bouts of an overwhelming desire to be dead have been, well, almost overwhelming. Haven’t had a serious one for some time now which is very good. (I originally wrote “staying alive” but it was too John Travolta. Yes, please thank me for the earworm.)

Stuart asked us: I’d like to hear her thoughts on: 1) pseudonyms and alter egos;

Pseudonyms and alter-egos… a double-edged sword. In my case a great shield to hide behind because I didn’t know who I was after my sense of identity had collapsed into a heap of inchoate rubble. Also I worked for an organisation which frowned upon its employees writing elsewhere. My blog with its pseudonymous sort-of-ego felt like a safe place to express the feelings of despair and death that are frowned upon by colleagues and family because they make them feel uncomfortable. On the other hand being pseudonymous can be like a red rag to a bull for a particular type of person who feels a strong urge to discover “the truth” about x. My protection, another’s provocation. So when that protection is breached (as it was with me) the feeling of vulnerability was terrible. I nuked my blog. Started a new one. Was found there too. An excellent lesson in the nexus of the private and the public and the internet. And this doesn’t even touch on the issues of authenticity/credibility/trust etc which can arise without attribution. I didn’t give a damn about any of that, I just needed a safe place to dump my pain. Mostly.

Words versus pictures… not just either or. One result of starting a blog (2003 if I remember correctly) was the acquisition of a tiny digital camera with a view to making it look more interesting. Like putting pictures on the wall of a room. My blog really did in some ways feel like a physical manifestation of a safe space in my mind. A haven, if you like, somewhere under my control that was mine. Anyway. Yes. Pictures were taken and at some point became more satisfying as a way of expressing the wriggling of the inchoate rubble than words. Whatever works, really, in whatever combination.

Whither… or wither? I am now a person with a name (Rachel Rawlins for those who don’t know) and in the unlikely event that someone wishes to find out about me they can. Not that they couldn’t before, as the stalker proved, but just much more easily. Therefore for this person, personal blogging means something different now from what it did seven years ago. Self-censorship is active for protection of self and others. However I never really “got” twitter (it overwhelms me) and I loath and despise facebook so I have an old-school feed reader stuffed with the urls of blogs. At the moment it’s a bit like watching connections being reestablished in an electrical circuit as some feeds flicker back into life with the odd new post. My current take on the matter is that those guys at Uborka (I don’t know if you’ve come across them) are usually ahead of the curve and they’ve started blogging again. It’s an interesting project combining a look back at what blogging used to be running in parallel with new and interesting uses of the platform… oh, wait…

I’d love to hear next from Pixeldiva, whose nom de blog/net has remained stable throughout, and has spawned (so to speak) Pix junior. I’d like her to gnaw on the meaty and portentous subject of “blogging baby” from her own and the future Pix teenager’s perspective. Since I know she’s an avid adopter of the new I’d like to know which of the multifarious platforms and services have proved a keeper (if any) and if so what makes it/them worthy. Finally, um, google glass – yes or no.

And could I thank Stuart very much indeed for nominating me? and apologise to Pix for not warning her of her task? And thank my dog… etc. I wrote it at the kitchen table without revision…

9 thoughts on “Where are they now? An interview with Rachel”