Like so many other artists that go on to become long-enduring successes, David Bowie’s first album doesn’t really fit into the rest of the canon. It’s the sound of someone trying to be something that they’re not, rather than finding their own niche and charging into it with gusto. 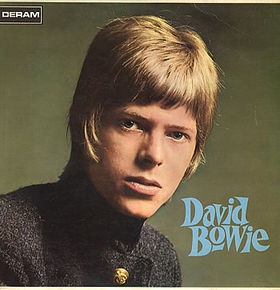 On first listen, I was feeling very critical, with certain elements of it really sticking out and ruining the entire experience for me. It has elements of a genre which I believe is known as “music hall”, there’s also a lot of flimsy hippie quasi-psychedelic guff, and a bit of a Kinksy influence as well. On the whole, the most jarring aspect is how unsexy it is. I’ve always viewed Bowie as being very self-confident with a certain charming swagger, but this is awkward and teenage. “We Are Hungry Men” is one of the few songs here that has got teeth, so to speak.

That said, with repeated listens things did pick up a bit. I quite liked the first half of “Little Boy Blue” which was uncannily reminiscent of Elbow. And some of the songs are quite catchy, in a not too annoying way. But it’s impossible to pick out any song and call it good, because scattered throughout the album are all sorts of odd moments and strange ideas that make you wonder what the fuck he was thinking. There’s some potent songs in here, but ruined by decisions that are basically dealbreakers.

All in all, a fairly unauspicious start. If this project were a quest to discover hitherto unknown gems, then I haven’t found any here.

Hits from this album: There’s probably no songs here that you will have heard of before.

My favourite song from this album: None. There’s a few that I fairly like, but it’s impossible to choose one, because as I said before, there’s a dealbreaker in every song.

Next up: David Bowie (aka Space Oddity). His naming convention for albums is, so far, a little unhelpful.