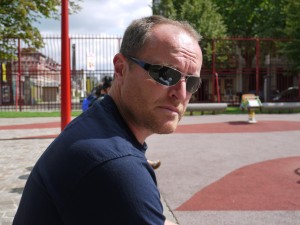 Are you living in the same place as in 2004/05?  2004 was a year of considerable change. At the beginning of the year, I was still living in Chichester, in an old pub. This abode was notable for the fact that, once every fifteen minutes, a bus would attempt to drive through the front door as it took the corner into Chapel Street. But I had just got engaged to Hels and was commuting to her flat in Tunbridge Wells and living half the week there. By August, my flat was sold and I was living full time in Tunbridge Wells – this flat was notable for the huge bath by the window that looked out over the old town (ridiculously and pretentiously known as the Village) and towards the Common – anyone with a decent pair of binoculars (or possibly even the naked eye) would have been able to enjoy a fine view of a bottom had they been looking in the right direction at the right time. We subsequently spent vast sums of money trying to sell that flat (which has put me off leasehold property for life). We ended up here in Ruralville at the very end of the year, just after our wedding. Hels famously leapt up and down when she saw this house and immediately told the agent how much we could afford as a maximum price. Strangely, I found we were somewhat disadvantaged in the price negotiations after that. Hels is very easy to beat at poker.

Well, that depends on whether you have seen me before. There is a very ancient photo somewhere on grayblog that was taken about 15 years ago. Since then, my hair has receded further, I’ve got a few lines and there is more than a fleck of grey, both on top of my head and around my chin (there may be grey in other places, but I don’t check for that). But I’m generally the same shape (albeit a slightly larger version) and haven’t had either plastic surgery or tattoos. If I ever go incognito, I’ll have to invest in both of those things.

Undoubtedly, the fact that everything is smaller and portable is a great thing. My mobile phone has way more processing power than any of the first five computers that I owned, but still fits in my pocket with only a mildly ridiculous bulge. But, increasingly, I find the problem is that the technology gives me more information, ubiquitously, but no more time to process and assimilate it. If someone can fix that, then the world will really be a better place for technology.

I did have a blog, but after meeting Hels, the updates became progressively less frequent. Then it sort of morphed into a linklog. And now it’s just a sad neglected place that gathers dust. It’s still there. The archives are still there. The very-dated template still functions. But the updates? Rare and generally not very interesting. I mustn’t blame Hels for that – but as life became infinitely more interesting in her company, I found I needed the blog less.

I use Twitter @graybouk and also have Facebook (mostly for work) and a rarely-updated work blog. [insert obligatory promise to get back to blogging here]

I’ve been pondering this. There are several things that I’m proud of.

My business is now, at long last, paying its way in the world and is recognised as one of the best in a very small field. Its future seems secure. I even get asked for my opinion by government and law makers. My Mum would have been very proud of that.

My/our marriage is fantastic. But that’s a joint venture and not something I could or should ever take too much credit for. But I know my Mum would have been proud of that too.

We’ve raised a fantastic son. He’s smart, funny and, dare I say it, a good looking chap. Again, another joint venture, needing input from me, from Hels, from friends and family, but mostly from Tom. And that was the thing that gave Mum the most pride.

How are you feeling? You haven’t updated the mood on your website since 2010.

Yeh. The end of 2010. I was sighing a lot then. Mum was dying from Motor Neurone Disease. I can only describe this as bloody awful, something I wouldn’t wish on the nastiest, most foul person I could think of.

My Mum and I did not always get on. We had a spectacular falling-out in the mid-nineties and didn’t speak to each other for months, in spite of seeing each other and working together every day. But we survived that. And, when I got married to a girl that she considered to be perfect (rightly) and then we produced her first and only grandchild who, in her eyes, went beyond perfect, then our relationship improved immeasurably. And then she got sick. And didn’t get anything like enough time to get as much enjoyment from Hels and Tom as I get now. And that seemed then, and still seems now, utterly unjust. (Hels’s dad died from Multiple Systems Atrophy just five months later. That was also crap).

But that doesn’t answer the question. Now, I’m feeling pretty good. I’d like a bit more money, rather more free time and a decent night’s sleep (that last one undoubtedly related to the first two). But I have many reasons to be happy. I’m a firm believer that working with living things – children and plants would fall into this category – helps you to have a long view and good perspective on life. I recommend it to anyone.

What has most changed in you since becoming a parent… and is it the thing that you thought would change before you became a parent?

That’s a hard question. I’m not a good observer of myself, so perhaps others, especially Hels, would be better able to answer that question.

I think that, before becoming a parent, I was probably more concerned about the practical changes that lay ahead – sleepless nights, dirty nappies, that kind of thing. I hadn’t really given much consideration to what might change in me. As it is, I’d say I’ve probably become a little more mellow and accepting (up to a point, at least). Having a child makes you reappraise things and you become more tolerant of other people’s foibles and quirks. You ask questions like:

The answer to all these (and other much weightier issues) is that if Tom chooses to live his life in any particular way (and assuming he’s not hurting other people along the way), then that’s for him to decide and choose – although I might ask him to justify and support his thinking with a reasoned argument (and I’ve gently started that now, by asking him “why?” when he says something – make him think a little rather than follow the herd). I may not agree with him, but I’ll respect his right to do and to be what he wants (subject to the hurting/harming/damaging/lawful caveats).

Once you realise that with your own child, then it is easy to extrapolate that thought process to just about every other human being on the planet. As a result, I think I’ve become more tolerant of other people’s ideas, backgrounds, motivations, philosophies, although I still struggle with the irrational and ill-considered.

All that said, BMW drivers who tailgate still really annoy me and should be summarily executed.

Do you have any idea why her outdoor hydrangeas are growing like gangbusters, but her indoor one, though still living, hasn’t grown at all and seems to be stuck in some kind of suspended animation?

Hydrangeas are mainly native to China and Japan (although there are other species from other parts of the world). In the wild, they get a period of cold weather each year, something we in the trade grandly call “vernalization” but which the rest of humanity calls “winter”.

Hydrangeas sold for use as house plants will have been artificially vernalized (i.e. put in a bloody great fridge) and then potted and grown on in a glasshouse (to simulate spring) until they reach the point of flowering, when they are then sold. This allows growers to produce Hydrangea plants in flower for 52 weeks of the year when, in nature, they only flower for a limited period.

The problem comes when you keep a plant in the house. Whilst you experience winter when you go outside, your plant experiences central heating and a fairly continuous set of temperatures (not to mention supplementary lighting when you have all the lights on – so it doesn’t get shorter day length either).

The best way to get the optimum performance from any plant is to mimic the conditions it would get in the wild. So, put it outdoors. The British climate does a fairly good job of imitating the climate in many parts of China. I’d also consider putting it into a larger pot (don’t skimp on potting compost – cheap compost is almost always crap. There are good peat-free composts around these days which are (in some cases) less damaging to the environment than peat – but don’t get me started on the anti-peat lobby). A little general feed will help. If you like blue flowers, add spent tea leaves to the compost (aluminium and iron, innit), otherwise you are more likely to get pink flowers, particularly if you are in a hard water area.

Unless I am much mistaken, our illustrious Scottish blogging chum, Gordon M Clean, has not yet done one of these interviews.

I should like to ask him these three things:

–          You will probably be doing this straight after returning from Glastonbury. I’ve never been (though I’ve been to a few other festivals, both in the UK and abroad). What are the best and worst bits of the Glasto experience, particularly when compared to other festivals?

–          Your blog has contained quite a lot of personal revelation over the years, particularly about relationships. Well, I’ve perceived that it has – I’m sure that there is much that you have not said, of course, and rightly so. Have you found that putting some of that stuff on to the blog helped you in any way? How does it feel to go back and re-read that stuff now? Or do you not go back to read it?

8 thoughts on “Where Are They Now? An interview with Graybo”