The terror started in toddlerhood, on a motorised dinghy called Scubidu. In his sole act of Sixties radicalism, my father had organised a protest cruise down the Chesterfield Canal, which – after some face-to-face lobbying of government ministers, Barbara Castle included – succeeded in saving it from closure. Thereafter, boating became the default family activity, as we chugged our way from Worksop to the River Trent and back again.

I’ve never had much of a spatial grasp – it’s a reason why I don’t drive, but that’s a whole other Fear Week – and so it was only a matter of time before I crawled off the side of Scubidu, and into the murky depths. And not just the once, either; by the time we traded up to Quartet, a fully-fledged cabin cruiser, it was practically my signature manoeuvre.

At a boat rally, in the presence of hundreds, I raised my game. Since Quartet had a roof from which to topple, my plunge into the canal basin was made all the more picturesque. Once again, my father leapt in after me, earning us both a write-up in the local paper: “Doncaster Solicitor Saves Drowning Son”. Forty years ahead of my first press byline, a slow-germinating seed was planted that day. 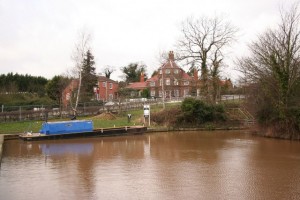 Decisive precautionary action had to be taken. For reasons that I have never fathomed, swimming lessons never crossed my parents’ minds. Instead, their thoughts turned to bondage.

From that day forth, I became North Nottinghamshire’s poster boy for rope-based restraint. Lashed in my lifejacket to Quartet’s roof, I was paraded through the waterway system, armed with my new catchphrase: “Please can you untie me, Mummy, I want to spend a penny.”

Finally, at the age of eight, it was time for my first swimming lesson: with the rest of my class, at the Doncaster town baths. With a particularly traumatic soaking fresh in my memory – I had tried to re-board Blyth Spirit, the latest cruiser, just as my father was pulling away from the towpath – I could scarcely bear to clamber down the wooden steps into the three-foot zone.

For the first term or two, there was safety in numbers – but as my fellow non-swimmers gradually got the knack, my plight became more exposed. Nobody really knew what to do with me, though; for all my tremulousness, I had also developed an iron will, and nothing could induce me to take my feet off the floor.

“I’ll have you swimming by the end of this term, laddie, or my name isn’t [insert name here]”.

One by one, I scythed through the reputations of my swimming teachers – mostly members of staff who had been dragged into extra-curricular activities, although they were spared the duties of actually getting into the pool with the rest of us. So there they would stand, fully clothed at the water’s edge, racking their brains for the magic words.

Three months on, they would all be broken men: reduced to bribing me with Mars Bars, if I would just jump off the second step up, because that at least would be a start, wouldn’t it? Heroically, I stood my ground, refusing the bait.

After a couple of years or so, I made a small breakthrough – there must have been double sherries in the staff room that lunchtime – as I progressed from hanging onto the side rail and kicking wildly, to hanging onto a cork mat and kicking wildly. If enough kicking was done, I could even manage some small degree of forward motion. Crossing the width of the shallow end duly became my new party piece – so long as I didn’t stray more than an arm’s length away from the wall.

One morning, as I merrily ploughed my course, I looked up and saw my geography teacher in fits of laughter. This perplexed me. I was doing well, wasn’t I?

“Yes, but there are two old ladies on your starboard side asking for their money back; they haven’t had a view.”

In fairness, there was something of the paddle steamer about my stroke. And so we shared a conspiratorial smile, and a small moment of communion: neither of us wanted to be there, nothing would ever change, it was a pointless charade, but at least I was keeping myself warm and seeing the sights. 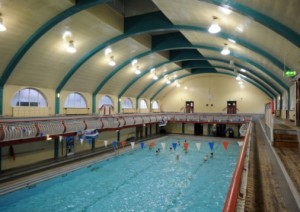 One summer holiday, my grandmother decided that enough was enough. Taking matters into her own hands, she escorted me back to Doncaster baths for six weeks of personal tuition, in the care of Mr. Parton, the resident instructor.

A burly fellow with a kindly manner, Mr. Parton was a gentle giant with an expert touch. On the first week, he lifted me onto his shoulders, and ignoring my sobbing meltdown, escorted me over the dreaded Red Line and into the five-foot zone.

From then on, progress was slow but steady, as Mr. Parton gradually won my absolute trust. And then, on the sixth and final week, a breakthrough: by standing inches away from me and walking backwards, ready to catch me should I need him, he succeeded in coaxing a simple breast stroke.

I was elated. A swimmer at last! And you know what they say: once you learn how, you can never go back.

Readers, I am the living contradiction of that received wisdom. As it was the end of the holidays, and as my poor, doting grandmother was emotionally wrung out from seeing her darling boy suffer, she was only too happy to end the course.

Six months later, I reported for my next school swimming class. It wouldn’t be a problem. I could swim, couldn’t I?

Alas, the triumph was never to be repeated. I think it was the bored maths teacher’s turn that term. Within a week, we were back to the Mars Bar bribes.

I have never swum again, and the fear is as great as it ever was.

Parents of Uborka, I urge you: please heed the lesson of the unfloatable miketd. Book early, book often, and spare the rope from the child!