“From ghoulies, ghosties and long-leggedy beasties and things that go bump in the night, Lord, deliver us”

How’s that for a bedtime prayer?

That was a favorite of one of my grandfathers, who would recite it with a glee that belied the intent of the words. Even my five-year-old self could tell that this was an incantation of welcome, not protection.

In my tiny little mind I knew that as long as my bedroom light was on and I remained in bed I was safe.

Freud wrote. “the first situation phobias of children are darkness and solitude”.

He connects it all back to birth and absence of the mother/nurse and then, of course an unemployed libido. Good ol’reliable sex-obsessed Freud. This is no use to me. He didn’t mention the alligators. 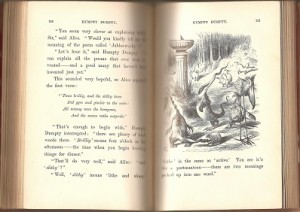 The alligators and slimy slithy toves that waited under the bed for an errant foot to step on the carpet. They couldn’t touch me as long as there was that light and/or no part of my body touched the blue carpeting that covered the floor of my bedroom.

As you may have guessed by now, the stories read to me were primarily Lewis Carroll, Maurice Sendak and Brothers Grim. There was a bit of A.A. Milne, but I had already dismissed Pooh as cute, but entirely ineffectual as a monster warrior. No, it was up to me to outwit the ravenous beasties.

That no one else could ever see them, made perfect sense to me. They were magic. They appeared and disappeared at will. Whether or not anyone believed in them made no difference. I had already learned that no one alive had ever seen God or Santa Claus and yet they existed, so the alligators and slithy toves were absolutely real. The Catholic catechism has much to answer for.

I did not have a bedside light at that age. Light for the room came from a ceiling fixture and the switch was behind the door (a design flaw that my parents never corrected). It never occurred to me to ask for such a thing as a lamp. Things simply were, or were not. I suspect my parents thought that if a lamp wasn’t there, I couldn’t break it and once I was put to bed, I wouldn’t be tempted to turn on said light and play with my toys all night.

There was a nightlight, and I did insist on my door being left open. Since the dim glow of the nightlight carried no more than a few feet, this did not protect me entirely. It kept the beasties under the bed, but if I stepped out of bed they would be able to reach out a snapping jaw or scaly claw just far enough to snag me. Peril awaits, patiently biding its time, ready for me to slip.

I rarely had reason to get out of bed at night. But on the rare occasions when I did, I had an almost flawless strategy-

The end of the bed was only about two-and-a-half feet from the doorway. If I carefully crawled to the left bottom corner of the bed, stood slowly, so as not to alert the alligators, and then leapt into the adjoining hallway without landing on the bedroom carpet, I was free and clear.

Imagine yourself standing on the high diving board, sweating, barely able to breathe with the fear. Then imagine executing a perfect dive. The Elation. The Triumph. You are ALL POWERFUL.

The maneuver to get back into bed is no less tricky. The hall is not long and the angle is tight. Before I ever saw an Olympic high jumper I figured the technique, except I have three (not 10) steps before planting a foot and leaping onto the bed. If I foot fault, it doesn’t count, because I am TOO FAST for the monsters. But that was close. Really close. I think I felt hot breath through fangs. They are awake again. Bury yourself under the covers, hold your breath count to 10 and will them back into mist.

They never got me.

Cellars and Basements would take me another couple of years to deal with.