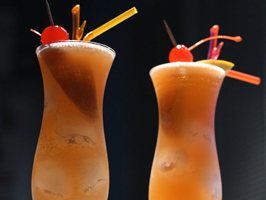 This being the Fear week, and with the residue of Hallowe’en still oozing its way home, the theme was Fear and Phobias. (Not Fear and Loathing, for once. No-one does cocktails like Hunter S Thompson)  I’ve done the place out with fake cobwebs, pumpkins, and more dodgy white sheets than the local KKK convention. I’ve got rid of the proper cobwebs though, and even hoovered the corners of the ceiling, so Dragon can sit in safety. Not that he ordered anything – but he can have a Black Widow (The cocktail, not the arachnid) on the house.

Ade unwisely requested a Big Bad Wolf, but the eggs were a bit off, so it might well huff, puff, and blow his back doors in. If not, it’s sure to put hairs on his chinny chin chin.

Graybo‘s big gin and tonic isn’t particularly scary, so I’ve mixed it with spider’s legs, absinthe, and the sweat of an accountant’s furrowed brow. That should give it a kick.

Speaking of kicks, Asta‘s asked for a gallon of coffee (maybe some of that kopi luwak shit) with a zombie chaser – or a shambler, as it’s known in the trade. I hope she’s not scared of heights, because someone’s going to need to peel her off the ceiling when she’s done – I’ve made the coffee so strong it dissolves spoons, and is served in slices. (Also known as “as usual”) 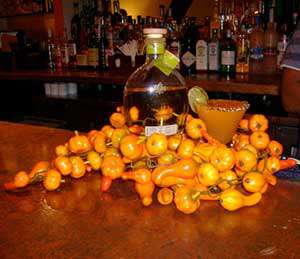 Pockless has asked for a pint, but hasn’t specified of what. So – a pint of pan-galactic Partida Pumpkin Margarita (about halfway down the page – it started with ‘rim a cocktail glass’, which appealed to my vile sense of humour)

Closing in on the end of the orders,Lori‘s asked for a Pernod and Black. I think that’s a bit of a racist request, but OK. She can have the Pernod, but finding the Nubian to serve it has been a real struggle.

And finally, Gordon‘s requested a virgin with a pina colada.  I’ve no idea where she’s planning on sticking that pineapple though, so I hope you’ve remember the KY. In the meantime, I’ve glued one of those crappy sippy-top things to the glass, so it’ll be nice and tight to get the drink out of. Hope you appreciate these little touches, Gordon – I know the virgin doesn’t. 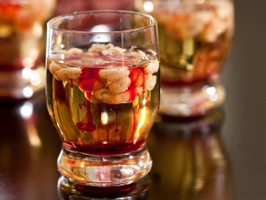 We then come to the non-orderers and Johnny Come Latelys. Thankfully there’s no-one with an obsession for punctuality.  In light of Mike and KTD’s dirty protests earlier in the week, there’s Brain Shooters for KTD, and a Stanley Steamer for Mike.

If there’s any other requests, I’ll add them later. If I’m still sober, of course.

[Update] : Bugger, I forgot Karen’s drink. As such, I’m going to christen it the “Amnesiac” – the combination of lime, kahlua and sambuca that she had last night. Sorry!