A Canadian Christmas is directly tied to our geography. Come December we are the frozen north of our clichéd reputation.  The ultimate American holiday is Thanksgiving, but for us it Christmas.  We are keenly aware of Solstice and by mid-month we are living in what seems like almost round-the-clock gloom, either iced-over or buried in snow or both and  we need to do something extreme to break up the darkness. 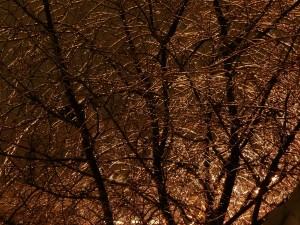 My early family traditions are tied to the Catholic Church. So are D’s. I am known as the lapsed Catholic in the family. I let it rest at that. For Christmas I put on my best clothes and go to Mass with all the other twice-a-year folk. It keeps the peace and frankly, among the Christian religions, you can’t beat a Catholic Mass in a cathedral with full choir and all the trimmings for theatre. The priest is liable to let things down at his end, but the good ones keep the homily to “love one another” and get on with the transubstantiation and pageantry.

For me the centrepiece of Christmas is food- the cakes, cookies, and treats that only get made at this time of year.  The history of my family’s Christmas treats goes back to my mother’s mother who  in her small town was renowned for her cooking and baking prowess. It was a skill not passed to my mother, although she managed to salvage a few of the most precious recipes for the edification of the family cook/housekeeper. (That standard of living did not migrate to my generation.) When D and I married, I taught myself to make the Christmas staples I remembered.  I was far from home and a French Canadian Revellion was not my idea of holiday spirit.

I started with something easy. Scrabble.  It might be known in the rest of the world as Nuts and Bolts, but when my grandmother called her recipe Scrabble in the 1940s, that’s what it became. 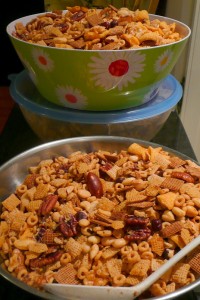 I’ve tasted the other combos, home-made and  the utterly ignorable commercial. This one is far superior. The salt and fat content are astronomical.  The first year in our new house, cash was tight so I decided to fashion the containers for the Scrabble from empty tomato tins.  I did the same the next year with another design.  Soon there were about a dozen to make each year and I had to start in October.   One year I decided to buy gifts at the local Christmas craft show—jams, minces, vinegars, soaps, linens. I was quietly made aware that everyone LOVED their gift, but had been looking forward to the Scrabble.  Everybody’s getting their tin of Scrabble again this year. 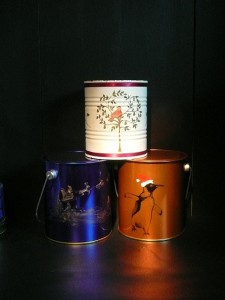 The top tin is about *cough*twentyyearsold, the bottom two are more recent

The next hurdle was the fruit cakes, both white and dark. People are either for them or against them. If you have only had a fruit cake from a store, I am not interested in your opinion. I give no weight to those whose experience is with dry versions. If it was both crumbly and mushy, again, the baker didn’t know what they were doing.  If you have an aversion to mixed peel, citron, and glacé cherries, then fair enough.  I don’t like liver. Everybody has something. My grandmother’s dark fruit cake is loaded with raisins, currants, dates, citron, peel, cherries, slivered almonds, molasses, brown sugar, eggs, butter and some flour. It takes triceps to mix and a slow, low oven to bake.  Aside from the eggs, butter and flour, every one of these ingredients would have been expensive and hard obtain. These cakes were made to last, because in most homes, they would be the only sweet thing on the table until spring. They have to be dense to hold together as they get lavished with brandy. Weekly. From November until the 24th.  This week I’ll unwrap the cheesecloth from the cakes, dunk it in cognac (I like the taste) and then rewrap the cakes. Over the cheesecloth goes plastic wrap and foil. Apparently my grandmother used waxed paper for an outer layer. She also used to decorate the cakes with marzipan and almond icing. I like the icing, but the cake is enough for me.  And my brother.  Last year, my sister-in law suggested that we no longer exchange Christmas presents and instead spend the money during visits. Children exempt.  I like giving people presents, but I can see how it can turn into a huge hassle for some people—so sure.  Except my brother still wants his cake.   Of course he does. It’s every snowy Christmas Day of childhood in bite-sized pieces.  I mix the cake, and see the kitchen in Nova Scotia, the kitchen in New Brunswick, and then my mind unwinds the memories of all those days coming in at dusk—feet and fingers numb from the cold.  The kitchen was always hot and humid from the boiling pots one the stove. The counter filled with the day’s baking. After hanging layers of wet wool on the radiator, we’d grab what cookies or squares we could before being told we’d ruin our dinner, and head for the living room to see what Christmas cards had come in the mail. 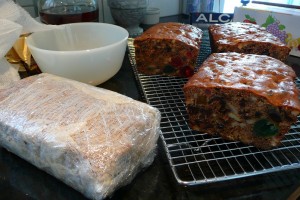 The tins for these cakes are more than a foot long. Those being mailed have to be cut in half to save on postage.

After the cakes come the Scotch Cookies which are, in fact, shortbread cookies. These are light as air and cut out of the dough with a liqueur glass. There’s a bit of icing in the fridge for last minute flourishes.   This seems like an opportune time to mention that my grandmother’s recipes come from a time when those reading them were expected to be already adept with a whisk and spoon.  In this recipe she calls for 3 1/2 cups of flour, but says I may not need it all. She does not say how I should judge my level of neediness.  In other recipes she calls for “butter the size of an egg”.  I am left wondering how big 1930’s eggs were.  Close enough.  I still have trouble deciphering her looping cursive notes but it’s my closest connection to her.

It’s not all nostalgia. I’ve added to the repertoire over the years with cookies and treats of my own, varying the line-up each Christmas with something new. This year it’s Membrillo. 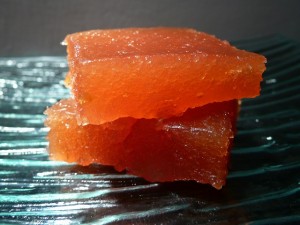 First attempt. Next time I’ll cook it just a bit longer for a slightly darker colour.

For some unknown reason quince are not common here in Quebec, so when I saw some at the market, I grabbed half a dozen without knowing what I’d do with them.  I grew up with quince jelly, but I’ve already filled the jam cellar, and I wanted to try something new. Then I remembered being served a quince jelly with cheese a few years ago. So yesterday I made the Membrillo, and it’s going to be part of the Christmas gift baskets.

The baskets (sometimes boxes) have become my favourite part of Christmas.  My friends and family buy what they need and want for themselves. Most of them are at the age where they’re trying to get rid of things. They want less, not more. Food is different. This they like.  And I like making it, wrapping it up and giving it away.  When I was a child I thought the proverb that it’s better to give than to receive, was ridiculous. Getting a new bike is far, far better than giving my Mom a bottle of perfume.  Now I much prefer to be on the giving side. Maturity?  Hardly.  I’m watching for that look of pleasure.  It’s still all about me…mostly me.  Chocolate anyone?