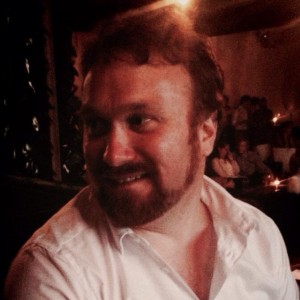 No! Lord, no. I now live in Melbourne, Australia, and have since I left London in ’07.

Would you have recognized me then? Well, I do rock a beard now so I definitely look different, but I have been recognized by people from ten years or so back I guess my eyes still sparkle.

I don’t! I think, as a lot of people have noted, that Facebook and Twitter have sucked a lot of oxygen out of non-topic-specific blogs (random shit, as mine was). I think, because there was a community of life-bloggers, we all kind of read each other’s stuff. Now people sort of read topic-specific things and form communities around those topics. I have a friend who writes a very good blog about writing and he gets a lot of readers. I think, with social media already filling the gap, there is not much of an audience for just random thoughts. Also, I was single when I blogged, which meant I had a lot more of a desire to throw my thoughts out into the universe. Now I just kind of ramble my thoughts to my partner, so there is less of an impetus to turn it into an essay for others. I do occasionally still have thoughts that are best expressed as long-form essays, but I usually find a way to direct them to blogs or sites that deal with whatever topic I am ranting about (usually games), so that they find an audience, but not on ‘my’ blog (which doesn’t have an audience). Melbourne has a very strong ‘storytelling’ night culture (like standup, but with less jokes) so I was recently involved with one of those evenings and it was a lot of fun, like a blog rant but saying it directly to people. I guess that’s pretty different. znaddanz.com is still up, but it broke ages ago (cause of something Sevitz did, probably) and I don’t know how to fix it, so I couldn’t update it even if I wanted to, hrm.

I am currently not employed, so getting a job floats pretty high in my consciousness these days. This is so that I can get some money, so that I can buy an XBox One.

I guess the situation in Australia is somewhat different than in the UK- our main concern here is the NBN (National Broadband Network), which was supposed to bring our internet up to speeds comparable with the rest of the first world, but the conservative party that just got in pretty much scrapped it, so we’re stuck in the stone age. I don’t really worry too much about web censorship, because the flow on information on the web is like water- shut down one avenue and the information will simply flow to the next portal- and there are an infinite number of them! It might affect the general populace, but even to someone even mildly tech-savvy like myself, it’s extremely easy to circumnavigate anything the government might throw up- the tech just moves so much faster than the regulation is able to.

In the past 10 years what’s the thing you though you wouldn’t cope with, but landed up managing?

Dark Souls. I mean, it’s literally designed to be impossible to beat and yet, somehow, I beat it. There’s a whole level in the dark where you just can’t see anything, I mean, who would keep playing after that? Me, it seems. Anyway: Dark Souls, man. Dark Souls.

London misses you [according to Sevitz]. What do you miss the most from your days of living in London?

I miss my friends, a lot, especially Sev. I really miss being in a band, that was a wonderful way to feel creative and motivated. I guess the two main drawbacks of not living in London is that there are less live music shows, and that you’re further away from Europe, which has some lovely places that I should have visited but didn’t. And while I don’t really miss London, I do miss Hampstead Heath. Hampstead Heath is awesome.

Do you celebrate Christmas or some other seasonal festival? Tell us about it.

I was raised Catholic, so while I am not religious, I do try to go to midnight mass on Christmas eve (with varying degrees of success). I guess it just reminds me of Christmas with my family, singing carols and all that. Also, Christmas ham. Every year I look forward to Christmas ham. Also my Christmas playlist, which is composed of every Christmas album ever, is a delightfully painful trial every year.

A starfish in a bucket. It was alive, but then it died. I was pretty upset. What happened to the question about the most influential technology in the last ten years? Because everyone said the smartphone, but can I give a shoutout to the robot vacuum cleaner? It cleans your house, while you do nothing! You don’t even have to be there, you can just go out and when you come back the house is clean! And you didn’t do anything! That’s pretty awesome!

Our next interview will be with Stee, who can be found on twitter @beezar1 and her website is http://whatspace.net/. Have you got any questions for her?

7 thoughts on “Where are they now? An interview with Destructor”