Look over there, have you ever seen a more boffo Widow Twinky? Know the secret to her success? It’s as Giles Bradreth said, funny knees. If you haven’t got funny knees you’ll never be a Great Dame. Lyle’s stupendous. She’s got her Aladdin Sane, and I’ve mixed up a pitcher of Aladdin Lyle Delusionals for later in the evening. It’s the same drink but with more vodka.

Did I mention that I’ve only ever been to one pantomime in my entire life, and it was Aladdin at the Fredericton Playhouse when I was eight? I remember shouting and lights and screaming and coming home on a bus hired for the trip with a peanutbutter and jelly sandwich and a warm 7up. Try not to be blinded by the pathos and humour of that little anecdote. I’m Canadian. We don’t do pantomime. Wait, there’s Toronto but it doesn’t count because nobody knows their famous people—although Rob Ford could probably do a turn.

Lisa’s right beside her with her Beauty and the Beast. She’s been deep in conversation with a candelabra for at least half an hour and neither one has cast any light on the subject. Ba-Dum-bah!

Graybo’s kindly brought a plate of mini carpetburgers and is nursing his Grey Goose and tonic. I think he’s a bit sad about his gruesome garden. Yes. He planted some seeds and they gruesome. Bang-Tish!

Karen’s armed herself with an Excalibur which  looks like an alcoholic sugar rush, which perhaps is just the thing for panto, given that their decibel levels can approach that of a 747 being escorted by a platoon of leafblowers.

Stuart‘s been up in the rigging with his Peter Pan for ages now. I think Krissa‘s Viking gluhwein something-or-other inspired him just a bit. It’s okay Stuart, she’s really Tinkerbell in disguise.  Americans don’t have pantos. Well, they do; they call it Tea Party in Congress, only nobody laughs.

I’ve got a pitcher of martinis set up over here in case K (aka Fran Giapani the mafia baker) and mike (DJ Freshly Pressed) show up.

And me? I’m a Puss with new boots, so I’ll have a Sour Puss and cranberry thanks. 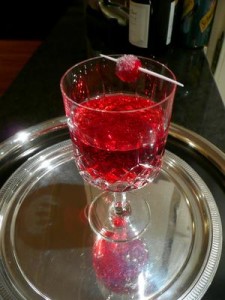 All together now:
Knock Knock
Who’s there?
Wenceslas
Wenceslas who?
Wenceslas train home?