Hello, Uborkunians. We find ourselves here again, in December, and I’m convinced I can’t be the only one looking back at the past 11 months with a resounding “EHH? How did they slip past me again?!”. An overly contrived feeling, I’m aware, but my life in general can currently be summed up with an huge WOOOOOOSH.

Christmas is nearly here, and your previous Yule Event hosts have been enthusiastic on the topic. Dear readers, I fear I may be less so excited, for as yet it has not been decided Where. I. Will. Spend. Christmas.  I’m in the same camp as Karen in seemingly always being split between different Christmases with different family or extended family.

In years gone by my ex and I would take it in turns to have Christmas with one family and New Year with the other. This worked well until the Christmas when my ex’s father came to us for Christmas instead. A Hindu gentlemen who announced two days prior that he had to be meat-free on the day where meat is celebrated, nay revered. Needless to say, that was the last Christmas the ex and I had together, and the last Christmas where I’ve been responsible for the cooking.

The most outrageous of things to me on that fateful day, as a Scottish Lassie with traditions at heart, was that I couldn’t serve him Lentil Soup. That great staple of my family’s cold winter nights; a thick hearty, salty broth made with a ham hough or a joint. Everyone in Scotland appears to have a Mother responsible for cooking THE BEST LENTIL SOUP YOU’VE EVER HAD IN YOUR LIFE, and mine is no exception to that. I have to confess that I feel pretty smug I can get even close to her elixir of a soup, even if sometimes you end up having to cut rather than ladle your portion. It is a boxing day tradition in my family house, one which makes me as happy as our other food-based institutions: pate on toast and bucks fizz for Christmas breakfast, after-eights with tea after Christmas lunch, and the lunch itself with mountains of turkey, stuffing, chipolatas, potatoes, bread sauce, sprouts wrapped in bacon and TRIFLE! 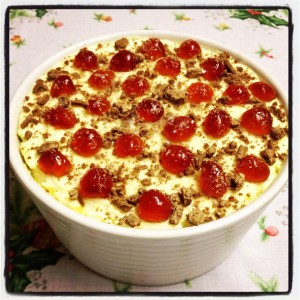 I guess I must confess here that, as much as I began this post sounding generally Scrooge-like, when I get in the Christmas spirit I really love it. However this year is the first year where there have been 3 invites to spend the day with lovely people.  Add in the feeling that Christmas somehow snuck up on me even though there have been seasonal displays in the supermarkets SINCE FECKING OCTOBER, and combine with a lack of money and general energy it’s safe to say that I’d really rather this year Christmas passed quietly and without hassle. However…

I will get excited when the plans have all been made. The decorations will be dragged out the cupboard and I will be transported back to a little girl again; playing old songs on the record player and dancing around whilst getting more tinsel and lametta on the floor than on the tree. The radio will be playing Christmas tunes and counting down to who will be Number 1 as I wrap presents somewhat evilly; knowing full well that I inherited my mother’s gift for not leaving a millimetre of edge paper without sellotape. This inevitably causes people to groan as they try to open another Fort Knox of a parcel, delaying the excitement for a few more seconds and causing giggles from everyone else (though mostly me, a Sadist at heart ;)).

And when the day comes – no matter where I am – I will stuff my face, fall asleep in the evening, and generally celebrate the fact that another year has nearly passed, and that I am incredibly lucky. Boxing day will come with a new tradition, one from Gordon which I have been more than happy to subscribe to, and I know will become a permanent fixture in my Yule Events – TRIFLE FOR BREAKFAST! 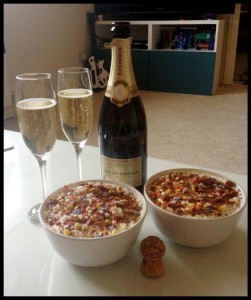 7 thoughts on “Tis the season to be… unprepared”