Six songs doesn’t sound like much, but the runtime is a healthy 38 minutes. 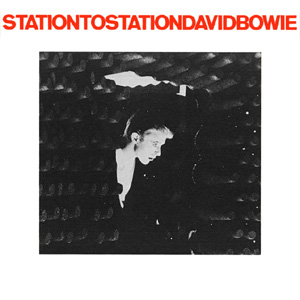 Bowie was in a bit of a tormented state around this time, partly because of all the coke, and partly because he’d just finished playing the lead role in The Man Who Fell To Earth, a role which affected him somewhat.

The title track makes up the first 10 minutes of the album. The first half has a time signature, rhythm and arrangement that all add up to make something that reminds me of Pink Floyd. And just like most Pink Floyd songs, I get bored of it after about 30 seconds. And then after about 5 minutes it all changes and takes a turn for the disco-rock, and this is a vast improvement. That said, this goes on for far too long, and it repeats a few dozen times before fading out. Some people would probably disagree, but in my opinion there’s a really good 4 minute song in here, it just needs a bit of editing.

Golden Years is a fantastic song and I can remember the exact moment that I first started liking this song – have you ever seen the film A Knight’s Tale? There’s a scene where the lead character, who has fabricated his heritage, is challenged to demonstrate “the dance of his people”. He clumsily performs some steps, the love interest jumps in to help out, then everyone’s dancing, the tempo picks up, the strains of Golden Years are heard, and then suddenly everyone’s anachronisming out. In the context of the film, it’s a great scene.

Word on a Wing is probably the most reaffirming song on the album, and while I find the construction of the song as a whole to be fairly basic and uninspiring, it’s got a great energy and I find Bowie’s singing to hit the mark nicely. It also wouldn’t be a stretch to refer to it as a gospel song, though it’s more about the passion of belief than the belief itself.

TVC15 is a rather strange addition, rather like Brian May’s song about his car. It’s the age old story, boy meets girl, boy takes girl back to his place, girl climbs inside boy’s demonic television set and disappears, boy contemplates following her inside. I mean, drugs are bad, we all know that, but I don’t think that this song would have existed without them.

It feels like we’ve barely begun the album, yet we’re at the penultimate track already. Stay brings the funk, the great bass work really gets your bum bouncing in the seat, and the chorus constitutes one of those occasions when a fantastic chord progression gets a superb melody that really manages to extract every sliver of awesome.

And here we are, Wild Is The Wind wraps it up. For the most part I can take it or leave it, but I will concede that the pacing is perfect, and over the course of 6 minutes it develops and grows in a most respectable fashion. Ends the album on a fade out though, just like Young Americans. Sigh.

Hits from this album: Golden Years was the only single to break the top ten (golly, just saying the words “top ten” has made me feel like a teenager again).

My favourite song from this album: Well, we all know how I love Golden Years but that’s a given, so I’m going to put Stay as my answer. With a side order of about a minute of Station to Station, starting at 5:19.

Next up: Low. Bowie’s “Berlin Trilogy” seems to be often put on a pedestal, and I’ve been looking forward to it as one of the highlights of this entire project. Let’s see if I’m impressed, or disappointed.