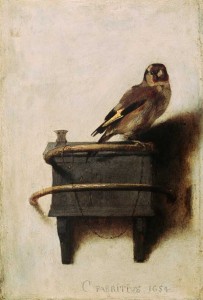 Readers be ye warned! Spoilers will abound from this point onwards. Book One is comprised of four chapters (1. Boy with a Skull — 2. The Anatomy Lesson — 3. Park Avenue — 4. Morphine Lollipop) and I think we’ll be discussing events at least through the first two or three, though probably more Book One discussions may flower in the comments through the weekend.

So, Goldfinchers. Here we are. We’ve begun our journey in Amsterdam, locked in a hotel and jumping at shadows with Theo Decker, although we don’t quite know why. Then, in a dream sequence that may or may not be an homage to the Mirror of Erised (okay probably not, Donna Tartt may not mind the Dickensian analogies but I’m betting she hates Harry Potter, well anyway it certainly reminded me of the Mirror of Erised), we learn that Theo’s mother is dead, that there’s a lovely shop run by someone named Hobie, and all we can do is file these little details away because we’re swooping down on a much younger Theo and his mother on the streets of Manhattan and he tells us, “things would have turned out much better if she had lived.” Wooooosh. Here we go.

(Let’s talk about is the suspended animation of flashback that Tartt constructs so expertly. It’s certainly not unique to this novel but a framework that is done so often and so badly that it was refreshing to open a book, realize what framework I was stepping into, and find it so well executed. We know in the first few pages that things have come to no good in this hotel room in Amsterdam, we’ve got this tantalizing and beautifully drawn place where Hobie will eventually be found, and his mother is dead and beloved. Phew! Were you as drawn in as I was?)

In chapters one and two, we have a terrorist bomb going off in the museum, never mentioned by name but 100% the Metropolitan Museum of Art. Theo’s mother is killed in the blast and he meets, and ministrates to the dying words of, Welton ‘Welty’ Blackwell, who gives him a ring with the family crest, with instructions to take it to Hobart & Blackwell and ring the green bell. He also presses into Theo’s hand the painting of Carel Fabritius’ The Goldfinch, which is so small and precious and miraculously whole amid chaos. When Theo leaves the museum, injured and traumatized, it’s with both these talismans in his hands.

Theo hopes his mother has survived but we know she hasn’t; his absent father and neglectful grandparents become the fate he’s trying to avoid to varying degrees of success. He’s taken in by the Barbours, resplendent in inherited wealth and cozy stability on the Upper East Side in a way that elides the turbulence under the water. Meanwhile, the painting is at first casually kept from view, and then as the days go on, more and more deliberately hidden and coveted by Theo.

I’m going to stop there. Here are some of my favorite thinking points in the first few chapters, to light the kindling for discussion in the comments:

9 thoughts on “Uborka Book Club: The Goldfinch, Book One”