Canada has two winter sports passions- hockey and curling. The world understands hockey, it’s like any other team sport with opposing nets, except on ice with fights. Curling is just weird.

Growing up, I lived five minutes away from the local Golf and Curling Club and it was a million miles away from me in interest and attraction As far as I could see, it was played by middle-aged men with appalling dress sense who spent most of their time yelling at each other to sweep what looked like perfectly clean ice. 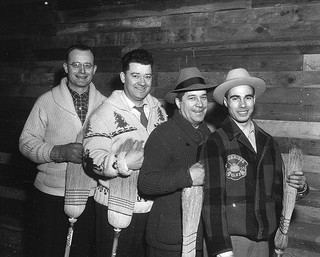 And the scoring was beyond me. They have four rocks inside the rings, why did they score only one point?

Now I play. It all makes sense.

It started innocently enough. D’s ball team had a party one Saturday that involved a game of curling- a chance for those who had never played to give it a try. We were told to wear comfortable clothes and bring an extra pair of shoes with rubber soles. By the end of the day I managed to push off from the rubber blocks (called the hack) and slide 6 feet* with a 44-pound (20kg) piece of granite before putting the correct spin on it, in roughly the general direction requested and at a speed sufficient to get it to travel the minimum 72 feet required. I think I fell every time as soon as I released the rock that day. I suspect part of the reason why I am a candidate for knee surgery now goes back to that day of crashing.

We had a ball. A rink full of friends and strangers and couples getting tipsy on ice. Danger and alcohol. Woo. I confess it was being told that the winners must buy the losers a drink that convinced me to go in the first place. At the club level, drinking is allowed, even encouraged during the game. This is why curling has had a hard time being taken seriously. Well, that and the misunderstanding about the sweeping.

When I was asked to write something for Uborka about curling, it was like being asked to write something about painting, or algebra or baking. I have too much to share. ( Not about algebra- I can only share shame with that subject) So I’m going to focus on three things- the curl, the ice, and sweeping.
The granite stone does not have a flat bottom. Take a look. 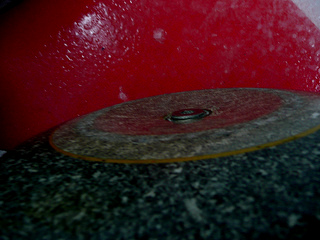 See that lighter grey ring inside the yellow band? That’s the only part of the stone that is touching the ice when it’s upright. That grey ring should be 5mm wide and sharp, but it’s the end of the season, and two years since the rocks were sent out for a regrind and polish. It’s no wonder that there’s a lack of consistency in how they behave now. Even at the pro level, during the finals, the two remaining teams can select the stones each player will use from among all available. Teams will have kept notes of every stone they’ve used and will select to get a pair matched in speed and curl. The rock curls because that tiny band is rotating while it travels over an ice surface that looks and feels like a rough orange peel. The slower the rock is moving the more it will curl. It will curl in the direction of the spin- In other words, if I cause the rock to turn clockwise as I let it go, it will curl to the right. This is called an “ inturn”.

There’s a whole section of the sport devoted to the physics of curling. It can get quite detailed.

The why doesn’t bother me much. I spend more time thinking about the quality of the club wine. But when playing I’m paying attention to the what—what is the rock doing? How big is the curl? Is it fast or slow ice.
The ice.
The ice is almost everything.
If the ice isn’t right, the game will be a nightmare. Making and maintaining the ice is a fulltime job and Canadians think so much of these magicians that they know them by name. Shorty Jenkins was known as the King of Swing. What he learned and put into practice about curling ice became the standard and now Canadian technicians are training the rest of the world. Level ice is hard enough, but then it has to be pebbled to make the rocks glide and curl. The pebble is applied using what is essentially a watering rose. Tiny droplets of water are sprinkled over the ice surfaceinstantly freezing as they hit the sheet of ice below. Look at the picture of the upturned rock and you can see what pebble looks like. Creating even size and distribution all over the ice is hard to do.

During the course of a game, the pebble gets worn away in places where the rock has travelled a lot. When this happens a path is created where, usually, the curl is reduced. A team that notices this first can often use this knowledge against an opponent. Knowing where the paths are, where the curl is greatest, how fast a rock must be travelling to keep it from curling at all— all of this is known as “reading the ice”.

So the captain, the skip of the team, has figured out the line he wants his player to aim for, and the speed he wants the rock moving at as it travels down the ice. He places his broom on the ice in a spot. Draw an invisible line from that spot to the hack where the curler is crouched waiting. This is not where the rock is supposed to stop; this is where the curler must aim to get to the desired spot. Beside the curler are two other team members with brooms waiting to make sure that the rock ends up where the team wants it.

Lots of things can go wrong. The curler releases the rock too fast, too slow, outside the target line, inside the target line. All the furious sweeping is done to create enough friction to cause a tiny amount of melting in front of the rock, making it slide further and straighter. World level male sweepers can carry a rock (keep it moving) some eight to twelve feet further than it would unassisted, and keep a rock that would curl, almost perfectly straight. This is why sweeping is important. The scoring target, the house, is only 12 feet deep, so if a rock is thrown to fall short of this distance, sweepers can ‘carry” it into the house. Sweepers’ triceps are amazing.

You at the back! Wake up! I’m gonna stop here and get everyone a drink. Watch your step though, I put curling shoes on your feet and the soles are Teflon and stainless steel. Wheeeee!
Oh, almost forgot. Yes. Curling is weird. I think that’s why I like it.
All curling questions welcomed. I will try not to bore you further.