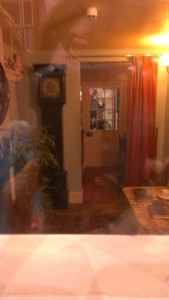 This is a photograph taken through the front and back windows of a tiny house, recreated at Basingstoke Milestones Museum. I am standing on the recreated footpath and Pete and Bernard are in the recreated back yard. Shortly after the photograph was taken, I joined them in the back yard and made myself leap into the air in fright when I opened the door of the privy to find a gentleman sitting with his trousers round his ankles, reading the newspaper. Despite being a waxwork, he looked a bit annoyed.

Milestones is a really good museum, well worth the admission fee considering sometimes you pay £25 for the family to get in and Bernard is bored within 20 minutes. This was interactive without being contrived, with one massive exception which was that it has been infiltrated by Lego. Children are provided with a spotter’s guide and the option of dressing in an explorer’s outfit, and have to actually look at the exhibits in order to score points for finding the Lego models of frogs, armadillos, sabre toothed tigers etc nestling amongst the displays of 1950s hairdryers and snuff tins.

We followed this with a late picnic lunch of KFC from the nearby drive-through, eaten on the grass beside a car park with a magnificent view over the Gala Bingo, and the towers of Basingstoke rising hazily in the background. Keep it classy, Uborkans.