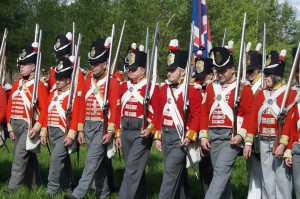 I spent the bank holiday weekend hanging out in a field a little South of Antwerp. I was there to commemorate the bi-cennetery of the little remembered Battle of Hoogstraten. The actual anniversary was in January but the organisers very sensibly held back till the weather stood a chance of being reasonable.

It was my first event of the year and a great way to start the re-enacting season. There were about 900 re-enactors coming from Belgium, Holland, France, Germany, Malta, UK, Ireland, Australia, US and Canada. There was a parade, a couple of battles, much hanging out, some campfire cooked food, and a fair amount of Belgian beer. The weather was excellent, which makes the whole thing far easier. I had the opportunity to catch up with friends from across Europe, as well as meet some new folk. Altogether there were about 10,000 members of the public who came along to look round the camp and watch the battle.

We are now well on the way on the road to Waterloo next year. The organisers are expecting about 8,000 re-enactors and 10’s of thousands of spectators….

Posted by Donkey on behalf of Ms Gammidgy