I first heard about geocaching many years ago. I mentally filed it away under “sounds moderately interesting, charmingly geeky, mostly pointless” and didn’t really think much more of it.

Last week Karen decided we should give it a try. She installed an app on her phone and this weekend we discovered our first two caches. 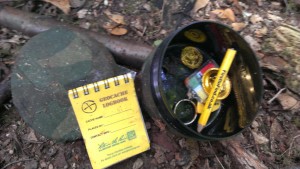 In a nutshell, geocaching is like a big crowdsourced, GPS-powered treasure hunt. You go to the specified coordinates and then look for the cache, which is usually well-hidden in a weatherproof container of some sort. It might be as little as a logbook to which you add your name, or as much as a plastic lunchbox containing various trinkets. 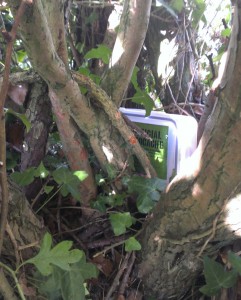 Some trinkets are extra special. One of the caches we found at the weekend contained a travel bug – an item with an attached dog tag containing a unique ID. Using this ID, we could see that this red fox bottle opener has hopped from cache to cache from Australia to Vietnam and then to England. We’ve taken it into our care, and will find it a new temporary home in France when we’re there in a few weeks.

So yes, it is charmingly geeky, and mostly pointless. But treasure hunts are fun, and I think you shouldn’t forget that.