I hadn’t originally planned on doing this as part of the project, but by popular demand, here is the Labyrinth soundtrack! 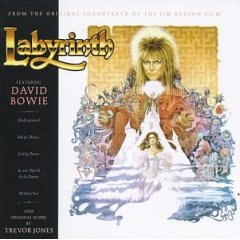 It really does get off to a great start with Opening Titles Including Underground which introduces us to a motif that recurs throughout the soundtrack (which I shall refer back to later) and an abridged version of the closing track. I tell you what, it’s a great start to the album, and it’s nice to see ole D.B. back on form. I mean, yeah, it sounds exactly like a song from an ’80s movie, but that’s not always necessarily a bad thing. Don’t tell me truth hurts, little girl, ‘cos it hurts like hell. The last minute of this song is a moody atmospheric synth-stringsy thing which, if memory serves, acted as the backdrop for Jennifer Connelly running through some fields at twilight or something.

Track 2 is entirely a backing music piece – there are going to be a few of them. This one is called Into The Labyrinth and is all angular and intense and brooding. Again, can’t remember exactly which scene of the film it accompanied, but something tells me that it was the scene where Jennifer Connelly builds a pony out of custard and calls it Maurice.

One of my favourites next, Magic Dance. You remind me of the babe. I defy you to hear this song without also seeing, in your mind’s eye, a slightly-terrifying bulge down the front of Bowie’s sweatpants. Funnily enough, this song in its 5 minute album version takes on quite a different aspect to the version in the film, which is about three minutes long (and while it does have two verses, the second one is basically a repeat of the first). The album version has a drawn-out instrumental ending which is actually surprisingly avant-garde, but really a bit superfluous.

Another masterpiece shows up next, opening with some bass harmonics, if my ear doesn’t deceive me, it’s Chilly Down, performed by The Fireys (one of whom is voiced by Danny John-Jules, fellow Red Dwarf fans). A strange scene in the film, it’s slightly haunting because of the head-swapping antics that the Fireys get up to, and somewhat laughable because of the absolutely shocking attempt at green-screen. It’s a great groovy song, but the production seems a bit off, like it was recorded in a vacant scout hut. There’s a disappointing lack of body to it. Which I suppose is ironic, given the Firey’s physiological quirks.

Hallucination serves as another instrumental background piece. To be honest, these were all written by Trevor Jones, so I don’t know why I’m bothering to review them. But then, I’m not really, I’m just making terrible jokes about them. Tasty fretless bass playing on this one, I think it corresponds to the scene where Connelly has a hallucination that her pyjamas are running a market stall and Simon Le Bon is trying to get a good price on a pineapple.

Now, here’s a corker. As The World Falls Down is Bowie’s ballad of the era, and, this is going to sound crazy, but hear me out, it’s fucking perfect. This one is from the masked ball scene in the film, in case you needed your memory jogged. And if you watch that scene, you’re so distracted by the visuals that you don’t really appreciate the quality of the song. In fact, a far more satisfying context in which to enjoy this song would be the music video, which was prepared for a single release at the tail end of 1986 that ended up being cancelled.

The Goblin Battle sounds like backing music to a computer game. I find myself looking around for power-ups without thinking.

Another real song now, Within You, is the Goblin King’s big intense brooding moment, the huge confrontation with Connelly in the hall of stairs. Your eyes can be so cruel. Just as I can be so cruel. That’s the laziest attempt at a rhyme I’ve ever seen in my life. To be honest, while this song has its purpose within the movie, it doesn’t really stand on its own.

Thirteen O’Clock has exactly the same start as the Theme From Ghostbusters. It accompanies the scene where they’re on the top of a skyscraper, and Jareth asks Sarah and Hoggle if they are gods, and Hoggle says no, and then Sarah says “Hoggle, when someone asks you if you’re a god, you say Yes!” And the old motif is back again in this one.

Nearly finished, Home At Last is the backing music for the scene where Sarah is being interrogated in a police station, and then she uncrosses her legs, and gives Officer Don from 3rd Rock From The Sun an eyeful of her minge. This song should really be called “As The World Falls Down (Reprise)” because it’s mostly just a plinky plonky instrumental of that song. Our friendly motif shows up at the end though.

And finally, the full version of Underground. This version is a bit more funked up, and then takes a surprising turn when the gospel choir show up for thirty seconds in the middle, before rushing off again to catch their bus. Meanwhile the credits are rolling, of course, and people have started leaving the cinema already, leaving Bowie singing “it’s only forever” to himself a few more times. But then it turns out that the gospel choir have missed their bus, so they pop back in while they’re waiting for the next one.

Hits from this album: Underground and Magic Dance had singles released in some markets, but neither were particularly successful.

My favourite song from this album: I like a few songs here, but none of them really touch me like As The World Falls Down.

Next up: Never Let Me Down.