Hello, been an abnormally long time since the last review, hasn’t it? This is usually enough to get people all afeardin’ that I’ve given up on it, but once again I shall banjax your doubtfulness.

Our album opener here is Day In, Day Out which just reeks of “live favourite”, it stomps and pounds and sets the stadium on fire. But it does also just vamp around for a bit and not really develop – the fact that it maintains a fairly constant intensity (with the exception of the bit half way through where all the instruments stop for a few bars – is there a word for that?) is both its strength and its weakness. 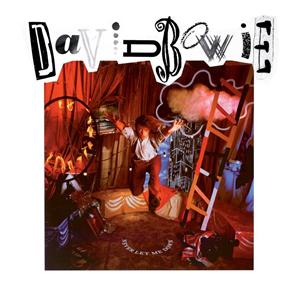 I’m very positive about Time Will Crawl, it reminds me of something from the Grand Theft Auto: San Andreas soundtrack. It’s high quality late-80s synth rock, and the lyric “Top Gun pilot” brings a smile to my face just for how unambiguously it dates it. The lead guitar and sax both sound great too, this song really is a perfect example of its genre.

Beat Of Your Drum puts Bowie back in that faux-operatic mood, with some fairly transparent innuendo in the line “I’d like to beat on your drum”. Subtle, Dave, subtle. This really is my brand of romance. Musically, it doesn’t really do much for me, there’s no particular element that I can put my finger on and say “I like that”. This song could have done with being quite a bit shorter, in my opinion.

The title track has a very cutesy sound to it, you’ll be deceived into thinking that it’s a love song but it’s actually a paean to his PA! I really like so much about this song, it hits all my buttons except for one – harmonica. The harmonica is a very touchy instrument for me, as I tried playing it on a few of my early songs and didn’t realise at the time how bad it was. So now, whenever I hear harmonica being played, it always either sounds brilliant or like my teenage folly – nothing in between.

I’ve been unable to form any sort of an opinion on Zeroes. I think that means that I don’t like it. It’s got some nice melodic touches, but I just don’t know what else to say. And that’s saying something, as I’ve been listening to this album for the last 2 months. I think maybe I’m getting sick of it. Let’s move on with haste.

And now for our regularly scheduled dose of weird, Glass Spider. What does it meeeeean? The first minute is predominantly just spoken word, but once the song gets properly going there are actually some really neat motifs threaded together. Again, I don’t think that it needs to be as long as it is, but the ingredients are definitely all there.

Shining Star (Making My Love) is just incredibly annoying. What’s that silly voice you’re doing, David? It’s quite intolerable. It’s hard to tell whether the song itself would annoy me anyway. I’ve been trying to figure out how to describe it, and for some reason Earth Wind and Fire came into my mind. But upon further observation, that comparison doesn’t hold up. Then I figured out that maybe it’s just that EWF also had a song called Shining Star, which is about eighty thousand times better, and I’m listening to it now, and I’m going to listen to the rest of it and come back to this Bowie album review later.

We’re back. New York In Love is indescribable brilliance. It’s back in the same vein as Time Will Crawl, the rock of its era. It’s got a great chorus and the whole thing is totally bass-powered, in fact that’s probably why I love it so much, the bassline is like a engine rumbling along under the bonnet, precisely-timed and dripping with torque.

Hey, it’s been a while since I’ve remarked about Bowie sounding like the Talking Heads, isn’t it? Well, here’s ’87 And Cry and the verse elicits such a thought. The chorus soars above it tastily though, and it all comes out a bit Robert Palmer. Make of that what you will. I’m indifferent, all in all. Maybe two months listening to this album has soured me a bit.

Finally, Bang Bang. And hey, it’s another Iggy Pop cover. It just trundles right on through without touching the cushions. Bit of an anticlimactic ending. To me, the album closer has a crucial role. It’s an opportunity to really leave a taste in the mouth, you can get away with things that you wouldn’t normally. It seems a disappointment to just chuck in another slice of filler.

Hits from this album: Day In Day Out and Time Will Crawl both did… okay. Never Let Me Down was also released as a single, to less vigorous response.

My favourite song from this album: Between Time Will Crawl and New York’s In Love, I think I have to hand it to the first.

Next up: Black Tie White Noise