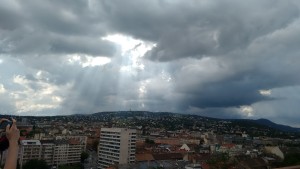 When I said that yesterday was a busy day, I was not taking account of today, which was surely far more busy. We started early again, because today is not a bank holiday and the bin men like to get on with it, closely followed by the people digging up the street below our second floor window. I am very happy with the AirB&B experience, and I’m pretty sure it’s hard to find a roadworks-free zone in BP at the moment, so that wasn’t a moan. 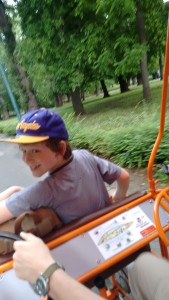 Having cleverly purchased bread and jam yesterday, that’s what we had for breakfast; and in (for us) a leisurely fashion, we didn’t leave the flat until about 9.30. The promised miserable weather was nowhere to be seen, so at last Bernard got his island bike experience. We hired a bright yellow side-by-side tandem affair with a little shelf on the front for His Lordship to sit upon while his grownups did all the work. I steered while Pete navigated us to the geocaches (and panicked every time we took a sharp turn). We didn’t find as many as we might have hoped for, but did have a truly marvellous time doing it. About five minutes before our hour was up, we realised we were a mile from Bike Hire HQ, and had to pedal like fury to get the yellow peril back there. It may have been cheating to track that one on RunKeeper, but it tells me we did 3.3 miles there.

For lunch, we went to the supermarket and had the adventure of buying kolbasz and pickled salad, and made extremely good sandwiches in the flat. We then had a siesta, because we are on holiday, so we can. I bet you wish you could have had a siesta today.

After our siesta, we set out to walk down to Batthany Ter, thence catch a tram to Clark Adam Ter to save small legs too much walking. Unfortunately this is part of the 50% of Budapest currently being dug up, so there were no trams and we had to use our best wise traveller skills to find a bus instead. Once there we had fun finding a geocache in the company of some other people who were also pretending not to be hunting for a geocache. We found it first. Then we took the funicular railway up the hill, always a spectacularly unphotogenic experience. 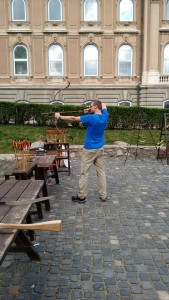 At the top, we circumvented some well-armed guards, and vowed to buy as little as possible in this the most exhorbitant part of the city. Bernard immediately found himself to be catastrophically hungry and thirsty, but was easily distracted by the opportunity to throw some shurikens at a barrel. See what good parents we are?

We did some general wandering, which included paying to walk on the only part of Fisherman’s Bastion that isn’t free, and yet isn’t noticeably different to any of the other parts. Bernard thought that bit was ace. Then we accidentally wandered down the wrong side of the hill and got on a tram that we hoped would take us to somewhere we recognised. Happily it did. This photo shows us being lost and scared at a tram stop somewhere in Buda. 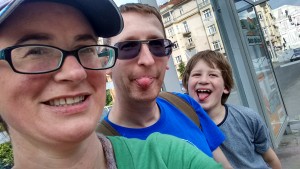 Finally, we fell into the nearest restaurant to our flat, Hid Bisztro, or Bridge Bistro if it makes any difference to you. In keeping with the theme of our day, this is bang in the middle of some major excavations. It also serves pleasant pizza and cheap whisky. We were ravenous, and ready to rest our legs before we do it all again tomorrow.