This morning we had a slow start, a lazy breakfast, and then wandered out into the sunshine. Because of course there is glorious sunshine on our last day here. We crossed the bridge and took the number two tram, which is my favourite, all the way down to the big market. Bernard did not disappoint me with his reaction to the huge colourful hall, sausage stall after sausage stall, tanks of fish waiting to be eaten, and small exhibition about light. We bought a couple of pieces of tat as souvenirs, then geocached our way along the riverside until it felt like lunchtime. 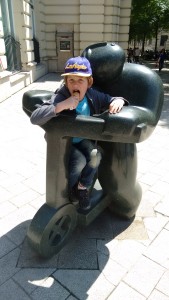 We found ourselves in an odd little pizzeria slightly to the left of Tourist Central, which also served traditional magyar dishes, so I coukdnhave the Jokai Bableves I’ve been waiting for, and the waiter complimented my hungarian, which has certainly never happened before. For dessert we turned right to find an ice cream stall. Pete, in the middle of Vaci utca, announced that he thought he might have seen a souvenir shop. Meanwhile Bernard and I were stuffing our faces with csokalade fagylalt. 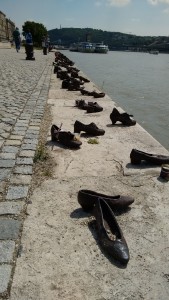 We paused to inspect the macabre holocaust monumnent that is a load of shoes on the bank of the Danube, representing hungarian jews who were killed and thrown into the river. This provoked a lot of complicated questions and answers. How much do you explain the horrible things that humans do to each other, to a nearly9 year old? He is interested in wars, but more from a video game perspective than anything else, so perhaps it is good to talk about humans as well.

We continued on to Olympias Park, which has an excellent playground and lots of shade. Bernard proceeded to “accidentally” get completely soaked in the fountain, which entailed a return to the flat for dry clothing. We spent the rest of the afternoon in the park with the Pocklesses, and then they took us to another pizzeria for dinner. Luckily we live by the principle that you can never have too many pizzas; though Bernard did insist on finding out for himself why we were strongly advising him against ordering the Diavolo.

And then we said goodbye to A CsaladiPockless and returned to our flat for baths and packing, and to discover that google calendar’s automatic entry of flight times is not as bloody clever as it thinks it is.

Budapest with my family has been mostly fun, with a few moments of painful memory for me, usually distracted instantly by my child pestering me for an ice cream. And that in itself is very therapeutic. He says he has liked it very much here, and would like to stay. It’s like the Pizza Diavolo all over again.