In an attempt to walk less distance today, we made a plan with the Pocklesses to ride on various railway trains. So naturally we started out with a 5k on the island runway (I’m so in love with the red rubber) and then a walk through thr Roadworks District to check out a couple of virtual geocaches. This is how impressed we all were: 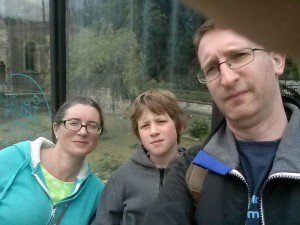 Then we walked all the way to Szena Ter and grabbed bready snacks for our lunch, and finally found the right fountain to rendezvous with DrP. The Pocklet was still asleep in the car so we went to play at an awesome playground while we waited for the end of his nap. This is how awesome: 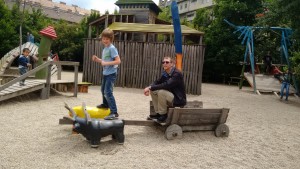 Then we walked some more until we got to the terminus of the cog railway, where we showed DrP his first geocache, before riding up the hill to the top. Here we played for a bit at another playground, then took the Children’s Railway (so called because it is operated almost entirely by children, even, apparently, during term time). We sat at the front in an open carriage, where it was both cold and sooty all the way to the other end. We saw a lot of trees. No walking was involved in this section of the day.

Then we took a series of trams back into the city and ate well. Tomorrow we are going on yet another different kind of train, the suburban railway. Yay!

1 thought on “City of Trains”