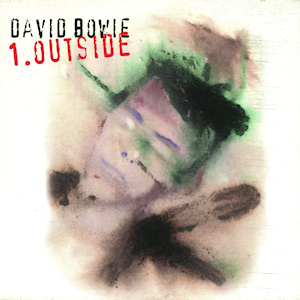 Upon my first listen to this album, I thought “oh no, not again.” It seemed to be more of that pretentious nonsense that Brian Eno came up with last time he worked with Bowie. However, upon further listening, it’s really started to grow on me. Let’s dive in.

First off, it’s probably worth explaining that this is a concept album. There’s a plot running throughout (dystopic near-future, murder in the name of pushing the boundaries of art, usual kind of thing) so there are recurring characters, and most notably spoken-word interludes that serve to augment the story. The lyrics themselves don’t do a very thorough job of explaining everything, I believe the liner notes would rectify this somewhat (if I had them).

The first actual song on this album is Outside. This song is probably the reason why I had such an initially negative reaction to the album, because it reminded me so much of the Berlin trilogy where all the components didn’t seem to quite fit together properly. However, with familiarity, I’ve revised my opinion of it to a far more acceptable “indifferent”. There’s much better stuff on this album.

The Hearts Filthy Lesson is one of my favourites, and it’s no surprise that Trent Reznor likes it too. It’s dark and dirty and heavy and industrial, and is sung from the perspective of the story’s main protagonist, Detective Nathan Adler. There’s also mention of a former lover called Ramona, who is also crucial to the ongoing plot. I love the way that the piano is incorporated into this song, it has a pleasing incongruousness. Which probably makes me sound hypocritical, after what I said about the previous song, but what can I say, I’m a fickle creature.

I don’t much fancy A Small Plot Of Land. Cool jazzy intro, but the dirgesome vocals are unbearable. Now, I fully appreciate that this album is a work of art, and my discomfort here is probably not unintentional. It’s got its place in the story – the supposed narrator of this song is the residents of Oxford Town, pouring pity upon the crazy unidentified serial killer whose actions are the subject of the album.

Next up is one of the weird segue pieces which takes the form of a recording by fourteen-year old Grace. She has a weird voice (which is really Bowie through some weird filters, but you could probably guess that) and can’t think straight, and it is revealed that Ramona (remember Ramona?) has put her on some drugs.

Now, you’ll have heard Hallo Spaceboy before, the Pet Shop Boys remix at the very least. What really caught me off guard is how much more brilliant the original is. It’s heart-stoppingly intense. It sounds like the heavy remix that you get on the B-side of a Republica single. Suddenly, the line “this chaos is killing me” doesn’t seem so inappropriate, because the song is chaotic. Honestly, having heard the original now, I’m thinking that the Pet Shop Boys have a lot to answer for. This one is sung from the perspective of Detective Nathan Adler’s assistant, Paddy, who is addressing Leon Blank, current prime suspect as the serial killer in question. Again, you’d need to know this from an external source, because the lyrics are fairly vague when taken in isolation.

The Motel opens as a delicate, haunting song, with fretless bass and the vocals (this time delivered by Leon Blank, who is hiding from the world in a motel) have been treated in a way that gives them a somewhat aquatic, shimmery quality, like an MP3 at less than 128kbps. Halfway through the song explodes into life, which I guess we can safely interpret as Leon being discovered, otherwise why would he be making such a bloody great racket.

In I Have Not Been To Oxford Town, things are continuing to look bleak for poor Leon. He maintains his innocence while confronted by the baying masses. Musically another great song, lots of catchy hooks and cute little guitar stabs, and it does that very effective trick of sitting on one chord throughout most of the verse, which just serves to accentuate the changes when they do come. The line “if I had not met Ramona” suggests why he’s on the hook for this murder in the first place.

Now, No Control starts off sounding a bit like Spaceman by Babylon Zoo, and ain’t that a pop culture comparison for the kids. In this song, we’re back to Nathan Adler’s perspective, as he muses on the futility of his job, and trying to effectively reverse entropy. Musically, let’s say it’s another one that I haven’t grown particularly fond of.

Another weird segue – who’s this fucking Algeria Touchshriek and why is he telling us about his shop and his loneliness? What’s that got to do with the price of fish?

I’ve mentioned before how Bowie’s influence on Of Montreal is so apparent sometimes, and none so much as the next song. It’s even got a nice verbose title, The Voyeur of Utter Destruction (As Beauty). This is the first time that the true murderer, identity not yet revealed, sings to us in the first person. They’re clearly struggling to retain their grip on reality. It’s suitably chaotic and shouty and incredibly incredibly busy.

And then we meet Ramona, a tortured artiste who’s not all there either. This segue leads right into the next song, I Am With Name. A fairly eerie song, and I’m not even sure that the lyrics serve much purpose in terms of pushing the story forwards. It feels a bit fillery. It’s almost as if it was added for the sole reason of giving Ramona some screen time.

Let’s move on to Wishful Beginnings another sparse and eerie soundscape. This one’s from the serial killer’s perspective, in which he possibly shows some remorse about what he’s done. If you don’t mind going down the rabbit hole that is TV Tropes, this might be an example of Pet The Dog.

I’m quite fond of the next song, We Prick You. I’ve always been keen on the marriage of an insanely fast drum beat with leisurely vocals, it’s strangely appealing. Lyrically speaking, it’s another instance where you’d struggle to figure out what it’s driving at, but external sources inform me that it’s supposed to be from the perspective of the court, who are now interrogating the three suspects – Leon, Ramona, and Touchshriek (who, as far as I can tell, has been dragged into this solely on the basis of being an old man who lives alone, poor bastard).

We are then treated to a segue where Nathan Adler evaluates the three suspects. Interestingly, he speaks with a broad American drawl, which couldn’t be further from the accent that he’s been singing to us in all this time, but never mind. And then, as if from nowhere, we’re treated to the erratic sounds of I’m Deranged, in which the killer doesn’t really tell us anything that we didn’t know already. However, what may be of note is that back in No Control, Adler himself repeatedly used the line “it’s all deranged”. Coincidence? Seems unlikely. It’s another song with a machine-gun beat and a little unsettling plinky plonking on a piano.

It’s quite a stylistic jump to the next song, Thru’ These Architects Eyes, which is another song that I’ve become very enamoured of. The melody hits that perfect edge where it’s catchy, but not predictable, and I’ve been singing along to the chorus a fair bit. This one’s sung by Leon, and given how happy he sounds about the world, I guess he’s no longer under suspicion for murder. Another jazzy piano solo at the end, it’s funny how there aren’t many musical instruments where you can get away with just bashing out notes randomly.

Another little segue where Adler clarifies that Leon and Ramona were a couple but now aren’t. Why is this relevant? Who knows. But we’re nearly at the end of the album.

Now, one complaint that I’ve levelled more than once during this project is that sometimes Bowie albums don’t have a strong closing track, but I’m going to say that I’m satisfied with Strangers When We Meet. Granted, it’s a little MOR, but to be honest I think I’m ready for it. Some of this album is quite tough going, so it’s a relief to finish with a real quality pop song, and as far as I can tell it’s not significant in the plot.

And we’re done. I’ve been listening to this album for many many weeks now, and I have to say that there are some songs on there that I could definitely have kept listening to. But it’s time to press on with the project.

Hits from this album: Hallo Spaceboy is the only single that did much.

My favourite song from this album: Tricky to choose this, I love the industrial vibe in The Hearts Filthy Lesson and Hallo Spaceboy, and the quality pop of Strangers When We Meet, but I think that Thru’ These Architects Eyes probably has the most going for it, in my opinion.