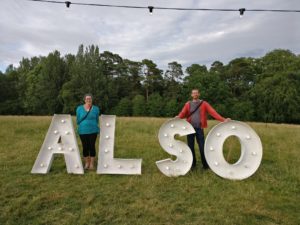 We spent the weekend in a field in Warwickshire, learning. Wouldn’t it be lovely if university courses consisted of living in the open air, eating halloumi and pomegranate wraps, and attending engaging and interactive lectures where the seating was bales of hay?

Arriving on Friday night and getting our tents up before the first downpour was the first challenge. We looked woefully at the prospect of heating up a casserole with the rain seeping down the backs of our necks, and abandoned the idea quite quickly. Food at Also was very expensive, but the value of a hot roast chicken and a gazebo with seating that was only a bit damp was high. We managed to catch a glimpse of Mad Apple Circus performing on the main stage, before heading drippily to our beds, peeling off soaked socks and trainers full of water, and wondering just how miserable it could get if the rain didn’t stop. 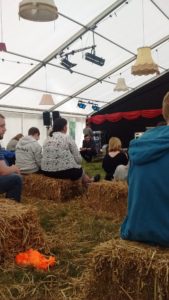 In the morning, the sun was out, and although the grass was still wet, we had high hopes for the day. Mike cooked up a Breakfast for Learning Stuff, everyone pored over the programme and planned their day, and the kids all ran off to the forest school. So much choice, and several scheduling clashes, so I went to a talk about dreams by Philippa Perry, but sacrificed the fabulous classicist Natalie Haynes to do so; Bernard chose a rocket building workshop instead of coming to see the charming Adam Rutherford talking about how we’re all related to royalty and none of us are special. In between DJing for Kids and Portrayals of Death in the Media, squeezed in a toastie and checked that our chairs and shoes were drying out nicely, which they were. 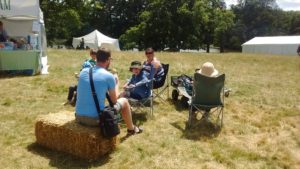 After writing some collaborative poetry, we had to have an early dinner because Pete and Bernard had an appointment with a professor of theoretical physics. We then found ourselves undergoing one of the less pleasant experiences of the weekend, described in the programme as a “cross-modal dance party,” and by me as a “paranoia-inducing cacophony in the company of a cheroot-smoking madman, inside a building made out of hay.” This was followed by lantern making and a quantity of cider by the bonfire. By midnight, I was in a crowded tent learning about black holes. When the generator failed, there were so many glowsticks in the room that we could still clearly see the speaker. 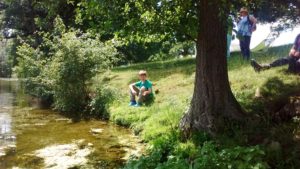 Music went on very late into the night, and the sun came up very early, so sleep was not a big part of the weekend. Sunday morning started with pancakes and then yoga in the sunshine. I missed out on an interesting talk on mindfulness, one on false memories which I would have liked to go to, and Kate Raworth’s Doughnut Economics, which Susan described as “the best talk I have ever heard.” I did get coached by Juliet Russell to sing David Bowie’s Golden Years, outside the Politics Cafe, surrounded by people reading the Sunday papers. And I did have a nostalgia workout, a lamb mezze, and a period of sitting on a deck with my feet in the lake while Pete was in a discussion of the psychology of music production. Finally, Pete and I went to a delightful talk about history and cookbooks, which was a fine easy note to completely top up my brain with, before taking down the tent and driving home. Bernard was asleep before we got to the main road, and snored so noisily on the way home that Pete thought the suspension had broken.

There was so much packed into that field that I am sure I’ve forgotten more than I’ve written down. Amazing. Also.