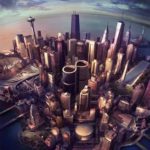 This is almost the wrong question to be asking. Given that I own all of the Foo Fighters’ studio albums, the question should be “why did it take me 3 years to get round to owning this album?” to which the answer, I suppose, is “lukewarm reviews”. I got the impression that this was one that I could afford to miss. But then, as my birthday rolls around, I get a little nudge from Karen to remind me to make sure there’s plenty of stuff on my Amazon wishlist, because apparently I’m very difficult to buy presents for, so hey presto.

The thing about Foo Fighters is that they’re undeniably popular, but I think it’s also fair to say that they’re not exactly the most musically adventurous rock band in the world. When you hear a new Foos song, you never have a moment of doubt where you wonder if your ears deceive you. And while lots of their songs are great, a lot are also Foos-by-numbers.

I had high hopes for this album, because I knew that each song was recorded in a different city across the USA and the album was intended as a homage to the musical heritage of each of those cities, so I was expecting a lot of diversity (you know, a country-ish song from Nashville, grunge from Seattle, and so on). But sadly it’s just got a lot of the Foos-by-numbers on it, and after a few listens, I was a bit underwhelmed. But to end the review there would be doing it a disservice.

Maybe it’s not just an album? Maybe it’s something else. Like a bimonthly curated box of snacks?

Back in 2013 Dave Grohl made a documentary called Sound City about the Sound City Studios in Los Angeles. As part of that documentary, he gathered a whole heap of musicians together to make an album of 11 songs, with one day spent on each song. And it was pretty good, and Dave enjoyed showcasing the historical context around the music, and wanted to do more of that sort of thing, so the idea for the Sonic Highways album-cum-television-programme was born. The next Foos album would be recorded in eight different cities, with one week on each song, along with a companion documentary series that talks about the musical history of each city.

After listening to the album a few times I felt compelled to discover what value the documentary added, if any. So I’ve started watching it, and at the time of writing this review I have seen four of the eight total episodes.

It all becomes a bit clearer now. The band would actually roll up to each studio with the song in a mostly-written state. With the exception of some last-minute changes to arrangements, the only influence that the specific city would actually have on its respective song was the lyrics, which would be heavily inspired by the interviews in the documentary, and often a guest musician appearance (which was generally fairly subtle in its impact). The documentary itself is actually damn interesting, excellent at immersing you into each city’s culture, but the songs end up feeling like a bit of a rushed afterthought. There is a small amount of footage of the band during each episode, and I could be wrong but I get the impression that some of Dave’s bandmates aren’t as enthusiastic about this project as he is.

One thing that is made explicitly clear in the documentary is that doing eight songs from different genres was always something that they strictly wanted to avoid, so that explains why we didn’t get the genre fruit salad that so many people were anticipating. Dave didn’t want to end up with a clusterfuck album (my words, not his) that jumped around all over the place – he wanted to make sure it remained, at its core, a Foo Fighters album. Which is commendable, but I think they played it a little bit too safe. My opinion (and maybe the rest of the band felt the same way) is that the process of making the documentary, far from unlocking fantastic new opportunities for the music, through its demands actually forced them to compromise.

Interestingly though, the experience of watching the documentary does improve the experience of listening to the album. Knowing the background behind the lyrics gives them a lot more weight, and the songs themselves feel more familiar, in the good way. So I’m glad that I did decide to watch it, as it has improved my sentiments towards the songs considerably.

In my opinion, Subterranean stands out, but if I’m brutally honest it’s (like everything else on this album) still just an amalgamation of half a dozen previous Foos songs.