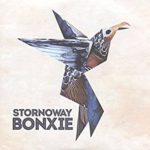 I first heard of Stornoway when they played on Jools Holland in 2009. Quite why I was watching that specific episode, I’m not sure – it might have been because Foo Fighters were also on it, which offers a nice and completely unplanned link back to the previous review in this series! Stornoway were absolutely stunning, and they had a very rare united quality about them – not just a bunch of musicians on a stage, but a single organism. We then found out that they were playing a gig locally in February 2010, so Karen and I went to that. An interesting thing happened at that gig – towards the end of the show, there was some sort of technical problem that resulted in the power being cut. The band proceeded to play the next song unamplified. The audience watched in silence, of course, and the intimacy in that room was electrifying. The ever-cynical Karen theorised that the power cut had been a stunt, orchestrated by the band to deliberately create that tender moment. And maybe it was, but fuck, it worked. Anyway, for some reason we then forgot about Stornoway for a while. Until recently, when Gammidgy (who has always been a fan of theirs) brought this album to my attention, and also bore the sad news that they split up earlier this year. I realised that this here was a remarkable band who I had somehow, despite being offered all the opportunities, allowed to slip through my fingers. So it’s time to catch up.

Stornoway are a very difficult band to categorise. They’re a bit indie, a bit folk, a bit pop, a bit rock. A lot of reviewers find them to be twee, a little bit in the vein of Belle and Sebastian. I can see why they get that impression – Brian Briggs sings with pure, high, almost choirboy-esque voice, and writes lyrics of sometimes endearing naivety about, or inspired by, nature. It’s certainly not sex and drugs and rock’n’roll, and the prejudiced reviewer might dismiss it as immature. But it’s touching, and clever, and thought-provoking, and in many ways this album is reminiscent of early work by The Divine Comedy – I can easily imagine Neil Hannon’s voice singing a lot of these songs.

In recent months, both my home ISP (A&A) and my mobile network (GiffGaff) have increased my monthly bandwidth allowance. For which I am grateful, but having adopted a frugal approach to ensure I stayed within the previous allowance, I suspect that I’ll rarely end up actually making use of the extra that’s now available to me.

Have they done any interesting covers?

You know what, I’m bailing on this question. Which is very unlike me, but honestly there is so much well-written eclectia on this album, I could just go round and round in circles.

Attack of the Mutant 50ft Kebab by Space