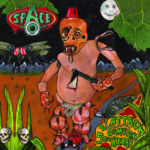 Every now and then, I wonder about the bands I listened to in my teens, and what they’re doing now. Remember Spiders by Space, that album that your girlfriend wouldn’t buy because of the cover? I discovered that they’re still active, so figured let’s slap their latest album on my wishlist and see what comes from it.

On first listening, the album basically sounded like regret. It sounded like the sound of my pen on paper writing a letter to Karen’s dad saying “I’m so sorry that I put this album on my wishlist because you spent your money on it and now I feel really guilty.” The songs are musically uncreative and the lyrics devoid of any wit or cleverness. Most of the choruses are just the title of the song repeated four times.

As I played it through for a second time, it wasn’t quite so bad – with a little familiarity behind me, I could start to appreciate one or two nifty little pop hooks here and there, but still there is nothing that I would go so far as to recommend to a friend. Maybe to someone I didn’t like, someone whose time I wanted to waste.

The best bit of this album was the bit where I felt like I had definitely given it as much time as it deserved, and unceremoniously removed it from the car to make way for the next CD. Normally at this point I’d rip it to MP3 and add it to the archive, but I might not bother on this occasion.

The Fault In Our Stars soundtrack by Various Artists. I sense that reviewing this will be tricky, so I’ll just do my usual stunt of just blathering on for three hundred words without actually reviewing anything. Damn, I’ve just given away all my trade secrets, haven’t I?