Owing to issues with my digestive system, about 6 months ago I cut out all caffeine, and almost all alcohol. This has made me a little sad, and has resulted in me spending a lot less money on coffee, beer and whiskey, and a lot more on artisan shaving soaps, bass guitars, and other items related to these pursuits.

Monitoring the results of these oesophageal embargoes, I’m fairly confident that the caffeine exclusion has helped significantly, less so with the alcohol. However, I have noticed that I’m back down from a 34” waist to a 32”, so I’m happy to continue on my current trajectory

Here are some of the alcohol-free beers that I’ve been trying over the last few months. Note that none of them are actually entirely free of alcohol – they’re all 0.5%. 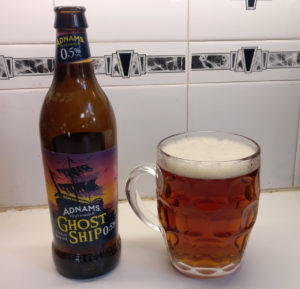 According to Adnams’ website, with such quotes as “all the same flavours and aromas as Ghost Ship 4.5%” and “no compromise on taste”, I should have been unable to tell the difference between this beer and its intoxicating brethren. Sadly, I definitely could. It was lacking in fullness, and the flavours felt unbalanced and metallic. However, some other reviewers have claimed that they found it to be so close to the 4.5% version that they weren’t sure which one was in the glass, so I’m wondering if maybe my tongue was being weird that day. Maybe I should give it another chance. Or maybe, after having spent a few months drinking very little beer, my palate has reset to that of an 11 year old.

Time for a quick lesson in brewing here – when making ale, you mix your hop extract with some malted barley and then boil it to kill off germs, and this mixture is known as “wort”. You then use yeast to ferment this, which converts the sugar in the malted barley into alcohol. Bosh, beer. As you can imagine, wort tastes and smells a bit like beer, but very sweet, and without any alcohol. Not something you’d drink for the sheer pleasure of it.

The reason why I tell you this is that St Peter’s “Without” Original is indistinguishable from wort.

After disappointing experiences with the Adnams and St Peters beers, I was starting to doubt that a decent alcohol-free beer could exist. Yes, I know, 2 data points is a bit premature. Nanny State was recommended to me, and it recharged my optimism nicely. It still has a little bit of that metallic tang that I found in the Ghost Ship, but on the whole it’s very drinkable and has become my “staple”. It’s also probably the one with the least calories, at fewer than 10 calories per 100ml (in my research, most alcohol free beers tend to have 20-30, and alcoholic beers 30-50).

While browsing in the supermarket, I saw this on the shelf next to the Nanny State. Similar to the Nanny State, it comes in a 4 pack of 330ml cans, tastes pretty damn good, and also has about 10 calories per 100ml. If you like one, you’ll almost certainly like the other. 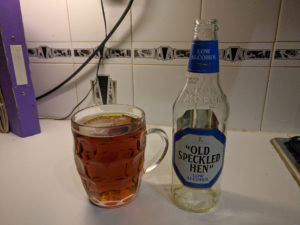 This stuff has only been on the market for a couple of months. Again, it has a slightly metallic taste compared to the regular OSH, but on the whole it’s perfectly drinkable, and stands as a nice complement to the options above for when you want something a bit less hoppy. Incidentally, this metallic taste that I’ve referred to repeatedly is not a thing that gets “added” as the result of some process, but rather a consequence of something that is normally masked becoming exposed. I wonder if the next evolution in low-alcohol beer brewing is to find some new ingredient that has a pleasant flavour in itself, but will also cover up that metallic aspect. Or maybe it’s just something that I need to get used to.

2 thoughts on “Alcohol-Free Beers (Part One)”