My brother (whom some of you know as the esteemed Dr Pockless) drew and drew and drew, when we were kids. He drew dogs and trees a lot, because we had books on how to draw dogs and trees. Then he drew cartoon characters including one called Sir Herbert Mole and a superhero with a cape. Then he drew heavy metal album cover art. Then he drew on napkins whenever we went out for a meal. Then he learned animation and got a job being a cartoonist, which is what he always said he wanted to be when he grew up.

I did not draw. I cannot draw. I do not draw. For 48 years, I have not drawn. Late last year we were in Grasmere for a funeral, and Dr P succumbed to his usual urge to buy art materials in the Heaton Cooper studio. Verily, it is irresistable, even I usually come out of there with a postcard at the very least. On this occasion, and with his advice, I purchased a 2B pencil and a sketchbook, announcing that I was going to learn to draw. He was very encouraging. He told me to draw every day, so that was my NY resolution for 2019, and I have kept it.

Over the last decade, I have learned that I can learn to do things. Before that I just bumbled along not being very good at anything, but what I have found is that if I actually do make the effort, and do something a lot (like knitting), I can get reasonably good at it. I will never be amazingly talented at any of these things, but I started with no skill and then did it a lot until I got some skill, and now it is a pleasing thing to do. 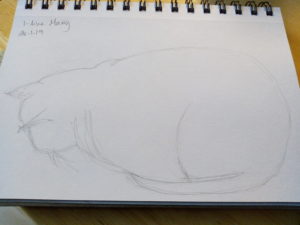 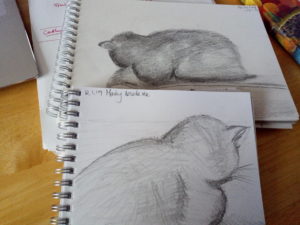 It is the 8th February and I am not very good yet, but I’m okay with that. I think this might take years, but it is enjoyable, so that’s ok. I draw my cat a lot, but frustratingly she rarely adopts any position other than loaf; however she is good for that thing where you draw in a continuous line without stopping. I am struggling to resist spending lots of money on art materials, when I haven’t mastered the pencil yet. I carry a sketchbook with me everywhere, but I’m too shy to get it out in public.

Here is the cat, being a loaf. It’s what she does best. I like drawing whiskers and shading, so this works out nicely for both of us. We are both getting old; I seem to be the only one of us willing to learn new tricks.

3 thoughts on “Art for Art’s Sake”