Loads of new alcohol-free beer experiences to report from the last month and a bit, a new review post is long overdue. 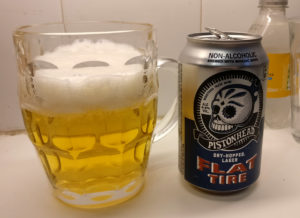 Another lager here. I wasn’t so impressed with this one. There does seem to be a little hint of a pleasant flavour snuggled away back there, but it’s drowned out an abrasive sourness. I suspect that the flavour goal with this one was more of a hoppy IPA than a traditional lager, but it doesn’t really succeed due to an overall lack of smoothness. The head is initially very buoyant indeed, as you see in the photo, but it faded very quickly. 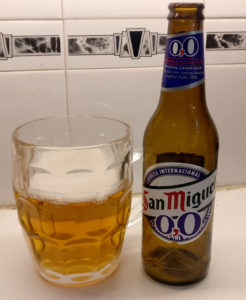 Another one that claims to be a lager but doesn’t really taste much like one. This one has a fair bit of that sweet maltiness that we’ve seen in a few beers – not to the extent of the undrinkable St Peter’s Original, but more akin to the Old Speckled Hen. It’s something that you get used to, and so, like the OSH, this is one that I’ll gladly drink if it’s what the pub’s got going, but in situations where there is a wider variety on offer, it probably won’t be my preferred choice. 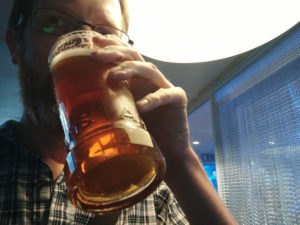 I know I’ve reviewed Ghost Ship before, but this time it was on draft in a pub so I felt like it deserved a second outing. The venue in question was Soho Theatre. Given the Ghost Ship was one of the first alcohol-free beers I tried, I’ve always wondered if I was judging it from a different perspective, that of a normal beer drinker rather than an alcohol-free beer drinker, and if this meant that my review was unnecessarily harsh. I’m always someone who likes to try to acknowledge and challenge their own prejudices. So, with an open mind and an open mouth, I sampled this pint, ready to find lots of great things to say about it. Disappointingly, it tasted much the same as it did that first time, so the Ghost Ship remains mired in the leagues with all the other alcohol-free beers which I consider to be not awful but not really very good either. 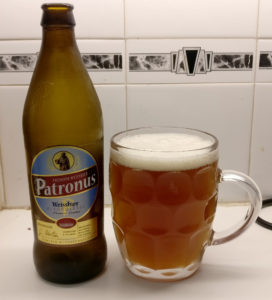 Wingardium leviosa! etc etc. Now that that’s out of the way, this stuff was bought for me by Karen from… I think it was Lidl. Or maybe it was Aldi. Is there a difference? Who knows. This stuff is a wheat beer, it comes in pints, which seems to be pretty common for the alcohol free wheat beers. It’s a fantastic chunky little beer, feels really thick in the mouth and the flavour is no slouch either, a really dense biscuity fruity gobful. It also doesn’t seem to have that medicinal quality that you get in some wheat beers. Good stuff, would definitely drink again. And yes, it is as cloudy as it looks in the photo. 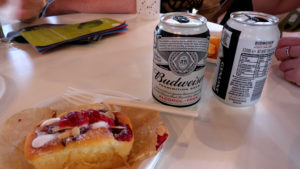 Another “out and about” alcohol free beer experience here, I was in Kew Gardens with Karen and Bernard and my sister. My sister is also, coincidentally, not drinking alcohol at the moment, owing to her own health issues which are unrelated to mine. We stopped off for a small and terrifically expensive cake in the cafe, and decided to also give this beer a try, hence the reason why there are two cans on the table.

Alcohol-free? Everything-free more like. This just tastes like it’s been watered down. In fact, if you put this into a can labelled “soda water” and gave it to me to try, I wouldn’t say “hey, someone’s put beer into this soda water can!” I’d say “engh, this soda water tastes a bit mingin.” In future I will steer clear of this abject piss with every fibre of my being. 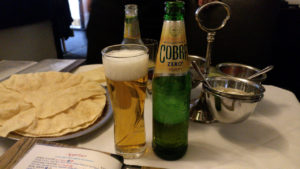 This time we’re in Thespian’s indian restaurant in Stratford-on-Avon. The beer is a bit disappointing – another one of those ones that’s got way too much of the sweet unfermented malt thing going on. Unlike the San Miguel, this one just pushes it too far, and when the waiter came round to ask if we wanted any more drinks, I declined a second and plumped for a lime and soda instead. So that probably tells you all you need to know. In the lager rankings, while this one isn’t the absolutely bottom of the pile (the Budweiser Prohibition wins that by a country mile) it’s pretty close. 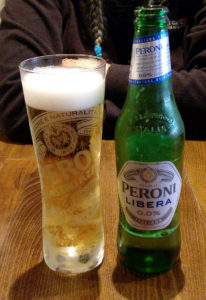 Back when I first extended this blog series to include lagers, in part three, I mentioned some of the situations in which I would always consider drinking lager, one of which was a Peroni with a pizza. And today, in the Zizzi in Stratford-on-Avon, I had a chance to do exactly that, and sample Peroni’s effort at an alcohol-free beer. On the whole, I’d say it is a success! I wouldn’t go so far as to say that in a blind taste test between this and the regular Peroni, I wouldn’t be able to tell the difference, however I would say that this is, like the Free Damm and the Brooklyn Special Effects and the Clausthaler, not just “nice for an alcohol-free beer” but “nice for a lager”.

The cumulative effect of drinking some of these beers, and I suppose that the Peroni is the straw that broke the camel’s back, is that I now find myself entertaining a hypothetical scenario: say my health issues disappeared overnight, and I was now back in the situation of being able to drink whatever I wanted, whenever I wanted – would I go back to drinking alcoholic beers? There are a few factors at play. Obviously there are some great alcohol free beers available, and when you’re drinking the good ones, it doesn’t feel like a compromise at all. There are all-round health benefits. And when you’re in the situation where you can pick and choose, like when you’re at a well-stocked supermarket picking up some beer for drinking at home, there’s the opportunity to bring home some drinks that taste just as good as their alcoholic counterparts. But the big sticking point, as far as I can see, is that pubs and restaurants still have such a limited range on offer. In my experience, the majority have one alcohol-free lager on offer, and that’s it. It might be one of the good ones, but then again it might not. So, going back to my hypothetical situation, I have to say that I probably would go back to drinking alcoholic beer again in pubs and restaurants, just because that would be the only way of having any choice in the matter. The offering that pubs and restaurants make to people who want alcohol free beer is basically “here’s a lager, and be glad that we’re even giving you that.” whereas for people who want alcoholic beer it’s “ooh, you can have any of these lagers or these ales or these ciders and there’s Guinness too.” Sadly I don’t see this changing any time soon, but we can dream.

Right, that was a long one. I was worried that this project would slow down as I exhausted the options available on the shelves at the supermarket, but if anything, it’s accelerating!