(Follows on from Part One and Part Two)

As each successive visit to the local supermarkets yields the same options for alcohol-free beers, I find myself confronted by two options to continue broadening my experience. I can either widen my search by travelling further afield, including ordering online, or I can broaden the definition of “beer” to encapsulate drinks that I wouldn’t normally consider the alcoholic variant of, unless my back was really against the wall. And so that’s where we find ourselves. 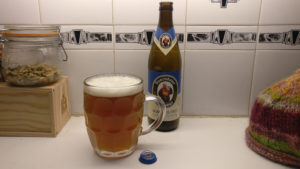 Similar to the Erdinger from the last post, this is a wheat beer. However this one is a lot more subtle, both in terms of the intensity of the flavour and the size of the head. I know that I’ve said before that I’m not a fan of wheat beers, but I think that this one dials back the flavour notch to a place where I could actually see myself drinking it as a semi-regular thing. Not sure if it’ll replace the Nanny State and Infinite Session as my go-to options, but it does fill a pint glass, so it might be the choice for when I want to minimise the number of trips to the fridge. 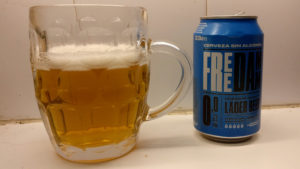 Yes, you read me correctly. I’ve finally been pushed over the edge.

I joke, I joke. Truth be told, there are plenty of situations in which I’ve been known to drink lager, and I’m not just talking about “when it’s the only option”. Let’s make a list:

So, with general lager chatter out of the way, what about the Free Damm? It’s good. It’s really, really good. In many ways, my feelings about lager help here, because to me this tastes better than what I’d expect to get if I just ordered “lager” in a pub, and it sure tastes a damm (haha) sight better than the lager I was drinking at the gig on a recent Saturday night, after I foolishly had a pint of London Pride and then needed something to wash away the taste of the dark one’s emissions.

This has got a very pleasant sweetness to it, with a delicate honeyed florality to it. Not in a “tastes like a mouthful of potpourri” way, but just enough that it tastes like a lager for good times on the beach and relaxing, rather than a lager for Wetherspoons and that tearing sound each time you try to move your feet.

So, on the whole, quite the victory for lager! I’m not going to get into the game of trying to give scores to or rank these alcohol-free beers, because the best beer depends upon what you’re in the mood for on the day. However, this is the tenth alcohol-free beer I’ve reviewed, and it’s definitely not lower than seventh, and maybe even as high as fourth. 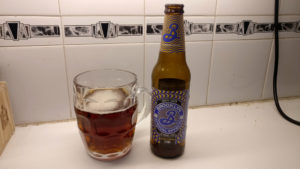 Another lager, and from the moment I poured it I knew that it had something special about it. The colour is dark, more akin to a typical ruby ale than a lager. The first mouthful is no less startling. The flavours on offer here are full-bodied and hearty, unlike any lager that I’ve ever had. In fact, with a decent hoppiness and a little malt on offer, I think that the flavours here are more likely to appeal to ale drinkers. This is a truly magnificent drink, and adding this to some of the other beers that I’ve had as part of this project so far, it’s got me thinking that there’s really no need to consider alcohol-free as some sort of compromise. Well, realistically, there is, and that’s the matter of variety. In a supermarket you have the choice of half a dozen alcohol-free beers against up to 100 alcoholic ones. In a pub, you’ll have the choice of one or two alcohol-free beers, against a dozen or so alcoholic ones. The enormous chasm that exists in choice can not be denied. But it seems to be narrowing, albeit gradually.

I find myself unsure whether there will be a fourth part to this series. New alcohol-free beers present themself less and less frequently, so it remains to be seen whether I’m going to continue to explore eagerly, or whether I’ll settle down with the nice ones that I’ve found, and wait for new ones to throw themselves into my lap.