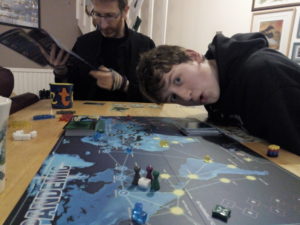 A year ago there was a Big Boardgame Clearout at Casa Uborka, but it looks as though the shelves are heavingly full once again, with thanks to recent birthdays and christmases. We are a geekily gaming kind of family, whether it’s tabletop games or videogames that we can play together. I could play boardgames ALL NIGHT LONG, and welcome you to come and join me. Here are the most recent additions to our happy home.

Disarm The Base is a deceptively simple-looking co-operative game, in which the team are breaking into an airbase and disarming the planes, while guards patrol the grounds. The mechanism is driven by cards in the draw pile, so like many co-ops, the outcome depends a lot on the initial shuffle; but good planning and communication between the players definitely makes a difference. We had a very successful streak with our standard three-player team, but found ourselves more challenged playing with four players on New Year’s Day. If you like Forbidden Sky, or are have a political streak, this will appeal to you. Pete doesn’t like being at the mercy of the deck; he says “You end up feeling like you’re not playing the game, the game is playing you.” Bernard finds it a bit samey.

Port Royal is a card game in which players are collecting victory points. All the information you need is on the actual cards, making it super quick to learn, and new players very quickly catch up so are not at any disadvantage. There are multiple strategies you can take, so it doesn’t stop being interesting. Works well with three or four players; the only dud game I’ve had was a two-player game, but a single data point is probably not enough on which to make a judgement. Bernard says this is “very fun, definitely.”

Pandemic has been on our wishlist for a very long time, so we were very happy to get it for christmas, and have played it a lot, quickly moving on from the beginners’ level with 4 epidemics, to the next level with 5. It’s like a less oppressive Risk. We had a very good run, and started to think we were really good at it; but since then we haven’t beaten the game once. This is another co-operative game, and the way it unfolds depends a lot on the roles you draw, and the position of the starting infections. This game intrigues me and Bernard and I really want to play it endlessly; sadly, as usual, Pete tires of it more quickly than we do.

In Exploding Kittens, you draw cards until somebody explodes. The non-exploding cards have various actions associated with them, so there is a certain amount of strategy, but this is one that doesn’t captivate me for long. The cards feature silly drawings and descriptions, which delight the younger crowd. Pete says: “underneath the slightly annoying wackiness, this is actually a pretty good competitive card game.” Bernard finds it highly amusing.

Bananagrams has been all over my social media this year, clearly it’s the jeu du jour. Pete describes it as, “strangely antisocial,” because each player is involved in their own puzzle until someone completes; there isn’t even a scoring system, you just get on with it. It passes the time nicely and is more fun than doing a crossword. Bernard enjoys making it difficult for himself by making very long and sometimes surprising words (xenophobia, polyamorous) and holding out for specific letters.

I first played Yahtzee aged about ten, during my christmas in Australia; I can remember well how much I enjoyed it, and it really surprises me that I haven’t picked it up again in 40 years. It’s not like it isn’t at the back of the cupboard in every AirBnB we’ve ever stayed in. This game is unique in the house, in that Bernard and I consistently beat Pete at it, which means he will soon refuse to play it anymore.

We do not own Azul, but played it chez Gammidgy on New Year’s Day, after being stuffed full of delicious curry. It is a truly beautiful game, with smooth pieces and pretty colours. It’s also lovely to play, one of those that I would happily keep playing for hours just for the pleasure of handling the pieces. It’s a game of planning, in which it does help to keep an eye on what other players are up to, and once you’ve got your head around it, is delightfully straightforward to play. Just lovely.

The other game we played chez Gammidgy was Illimat, a game created by The Decemberists (remember them?). This one is Really Gorgeous, with a cloth board and tarot-esque cards. The mechanism starts simple and gets more complex and interesting as you figure out what you’re doing. Really satisfying to play, may have to beg to borrow it.

Today’s honourable mention goes to Wingspan, which we played at Insomnia gaming festival in the summer, and absolutely fell in love with. The beautifully illustrated cards! The charming pastel-coloured eggs! The bird feeder device! Loved it so much, but it’s almost impossible to get hold of, so if you have a copy and would like to sell or trade it for one of our many games, give me a shout.