First and foremost, this is not a blog post about Coronavirus. Well, not directly. This is a blog post about a board game! There will be spoilers towards the end of the post, but I’ll let you know when they are coming, so you can safely keep reading until then.

For a while now, Karen and I have been meeting up with Gammidgy and Susan for a board game session every now and then. At the end of our last such meetup, Gammidgy waggled around a copy of Pandemic Legacy, which is a game designed for a group to play over multiple play sessions, and a plan was born.

Pandemic is a co-operative board game for 2-4 players. In it, you work together to control and find cures for 4 infectious diseases. The board looks a bit like a Risk board, but the gameplay is actually fun. Each game takes no more than an hour, and each playable character has their own special ability that will impact how responsibility is divided. If I were to level one criticism at Pandemic, it’s that, like a lot of other co-operative board games, your opponent is the luck factor. At the end of a game, you often find yourself thinking either “that was too hard, we never stood a chance” or “that was too easy, we barely had to try.” However, this is only a mild criticism – it’s not so bad that you ever find yourself losing the desire to finish a game.

Pandemic Legacy is a special version of Pandemic with the same core gameplay rules. However, these rules will change with each subsequent game you play. Some of these rule changes are ones that you are able to control, and some of them happen automatically as part of the “story”. At the end of the story, which will be between 12 and 24 games, depending upon your win ratio, your game board and playing components will be indelibly marked, bearing the scars of your gameplay experience.

Looking at the contents of the game box, most of it is secrets yet to be unwrapped. The main story is contained within a specifically-ordered deck of cards, but there are also eight mystery boxes, each presumably containing extra playing pieces, which are to be be opened up in response to triggers unknown, and also many mystery dossiers which are like advent calendars in their impenetrability. 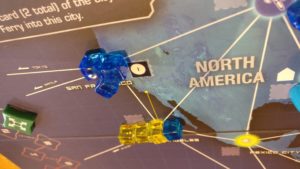 Yesterday we convened for the first session of the Pandemic Legacy marathon. After lunch, we punctured the cellophane and started to unwrap. Since neither Gammidgy nor Susan had played Pandemic before, we followed the suggestion in the rule book to initially keep the “Legacy” components in their plastic, and just play some regular Pandemic until we were all up to speed. We lost our first game and won the second, though we realised that we’d actually been cheating slightly by not playing a rule correctly, so we played (and won) a third game to be sure. With this done, and half the afternoon already gone, we extracted the rest of the playing pieces and prepared to play Legacy proper. We continued playing with the same characters that we’d used for the first three games, which were as follows:

In any board gaming session, there’s always one person who is nominated as the “rulesmith”. This person reads the rules to the rest of the group (pausing as appropriate when someone leaves the room or decides to start talking about knitting) and keeps the rule book by their right elbow to refer back to when edge cases and questions arise. It made sense for me to carry out this duty yesterday, as I’d played the game before. However, the knowledge that this was a linear experience, so once we started playing we wouldn’t be able to easily restart, meant it was important to get it right first time. A lot of pressure for me there.

The game’s story is divided into 12 months, which explains the name of this blog post. If you win a month, you progress to the next one. If you lose, you get one retry, but if you lose a month for the second time then you just move on to the next month regardless. So the minimum number of games you’d play would be 12 (if you win every month first time) and the maximum would be 24 (if you lose your first attempt at each month). The game mechanics contains a self-adjusting system, so it will get easier if you are losing, and harder if you are winning.

At this point, if you have played Pandemic Legacy before, or if you aren’t really a board gamey type, then please feel free to continue reading. However, if you’re now thinking “this sounds fun, I should get this” then it’s probably best if you go away now, as here come spoilers. Sorry to lose you. Have a good week.

Still here? Cool. Let’s form a tight little conspirative huddle, now that there are fewer of us around. Everyone dig into your bags and produce your chocolate covered raisins or whatever snacks you’ve got secreted. We’re the inner circle. Sssshhhhhh…

So the first game began pretty much like a regular game of Pandemic, with the usual goal to cure all 4 diseases. However, there was one adjustment – upon the second “epidemic” event occurring, we were to turn over the next card in the “story” deck and read it. Epidemic events can be fairly catastrophic, but you’d usually expect to get 3 or 4 of them during an average game, so to all intents and purposes, that second epidemic was a certainty.

We proceeded with the game, with that little purple reminder token hanging over our head like the sword of Damocles. The tension was palpable, but the game was going okay. One or two of the cities were starting to look a little unstable, but a win looked likely. There weren’t too many of those little coloured cubes left on the board. And then, the second epidemic event happened. Gammidgy is the nominated “storysmith”, partly by dint of being sat closest to the game box. He turned over the card and started to read.

Bad news. One of the 4 infections – whichever is currently the strongest, in our case the red one – had evolved and was now incurable. Our jaws dropped. Not only that, it was now also harder to treat, requiring an extra action point. We were instructed to open one of the windows on one of the dossiers, which exposed a sticker to be applied to the board to remind us that the red disease now had this special status.

At this point, we panicked a little. If memory serves, by now we had cured the black disease, and we were near to having cures for the blue and yellow. But red was in a bad way, and was suddenly a whole lot more urgent. We re-strategised as best we could, but were unable to prevent cascading outbreaks of the red infection, and we lost that game. A couple of the cities in the red zone are now already in a state of riot, and my character (Shannon, the Researcher) was actually in one of the cities when an outbreak occurred, meaning that they are permanently scarred. On the upside, we managed to completely eradicate the black disease, which allowed us to apply a positive mutation modifier to it, meaning that it will be easier to cure in all future games. The game permits you to apply two upgrades at the end of each game, whether you win or lose. With the positive mutation to the black disease as our first choice, for our second we chose to give Eric (the Medic) the capability to treat the disease in adjacent cities without needing to move to them. This seemed to be a very strong upgrade that would be especially useful in managing the red disease. 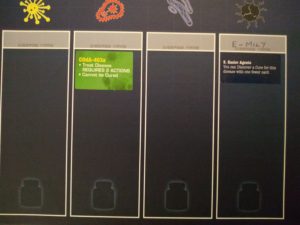 The red disease is now incurable, but the black one is a little easier to cure

We immediately began our second attempt on January. From the outset, our new strategy took into account staying on top of the red disease. The Medic and I went over to the red zone to manage the situation there, while the Dispatcher and the Scientist worked tirelessly on finding cures for the other three. The cards were in our favour this time, and we found cures for black and blue very quickly, with yellow following not too soon after, before too much damage could be caused.

For our two end-of-game upgrades, we chose to build a permanent research station in Tokyo, and also to convert the Hong Kong city card into an optional special event card, as it struck me that since we no longer have a reason to collect red city cards for finding cures, we might as well try to get some other use out of it. We do now need to protect Tokyo though – if it suffers more than one outbreak, the research station will be lost and we’ll never be able to build a research station in that city again. 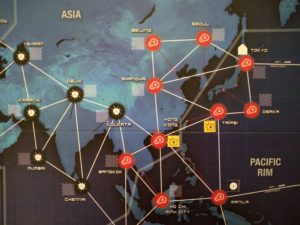 Considering it’s only the end of the first month, the state of these Asian cities is troubling

At the end of the January session, I must admit that I’m a little concerned. It’s good that we won on our second attempt, and we have some very useful new upgrades, but we are left with two cities in a state of rioting, and the Researcher has a permanent scar. There is no way to make a city more stable, nor to remove a scar from a character. The die is cast. But this is the fun of the game. With any game, when you lose, you can examine why that happened, and develop strategies for avoiding that situation in future. This is no less true with Pandemic Legacy. However, with a more conventionally-structured game, you have a conversion ratio of 100%. There’s no residue leftover from the loss – you can convert every shred of it into new strength. But with Pandemic Legacy, there is some residue. It’s not a completely fresh start. Our game is always going to be slightly harder as a result of the fact that we didn’t manage to completely avoid outbreaks in the first game. We can’t undo that. We can only try harder to prevent it happening again.