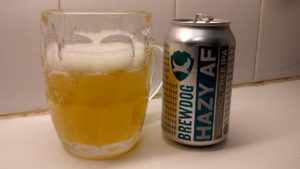 I initially tried this at home, as Karen stumbled upon a can and brought it home for me. Since then, I have also been to the Brewdog at Clapham, where they serve this on tap, and had a couple of pints there.

It has a fairly intense grapefruity smell, and is indeed as hazy as its name implies. It’s a fantastic little drink, with just enough tanginess and sourness to be exciting, but not so much that it’s a cause for concern.

As we were leaving the pub in Clapham, my sister (who is also a regular drinker of alcohol-free beers) remarked that she’d had a good evening, and while most of this is obviously down to the sparkling company, she did mention that another contributor was that she hadn’t felt like she was “missing out” in the beer department. In terms of flavour, the Hazy AF doesn’t feel like it’s a compromise. 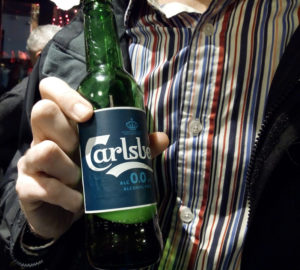 Karen and I were on our own in Belfast for a couple of nights, so we took the opportunity to get out in the evening and sample the local nightlife, with a particular goal to take in some live music. Our first stop was The Harp, where the beer was Carlsberg 0.0 (a very drinkable lager, comparable to Heineken 0.0) and the music was two men of pension-taking age playing crowd-pleasers such as “Delilah” and probably “Come On Eileen” on acoustic guitars to an uncomfortably large and well-lit albeit packed room of incredibly drunken people who were dancing around and bouncing off of everything (a very unenjoyable experience, comparable to being kicked in the knackers repeatedly by a horse made out of bricks that bears you a grudge). 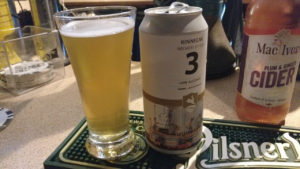 We wasted no time in putting some distance between ourselves and The Harp. As we approached The Sunflower we were initially slightly concerned by the cage around the front door, but I peered through the window and it seemed perfectly welcoming within so we went inside. The experience was the opposite of The Harp, both in terms of beer and music.

They had a couple of alcohol-free beers on offer and I went for the Kinnegar 3 as I’d never heard of it before, and I suspected (correctly) that this might be pretty hard to get hold of back home, and I might be waiting a long time for my next opportunity to try it. This beer is a very tasty hoppy IPA and I eagerly slurped up a second one, while Karen steadily became more stocious beside me as she had had a G&T in The Harp and two ciders in The Sunflower.

The band in The Sunflower were a quirky group sat around a table playing Americana/Folk music. One of them had a fine gravelly singing voice that reminded me of the guy from Gomez (hey, remember them?) While the songs that they played weren’t your typical crowd pleasers, they played with soul and we enjoyed being there. No idea what the band were called, I tried to find out afterwards but fishing in such obscure waters was an impossible task. 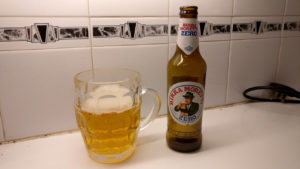 This was another one that Karen picked up for me. If I had one criticism of this lager, it’s that it felt a little more fizzy on the tongue than my tastes would prefer. Other than that, it’s a very good lager. It has a little of that sweet malty flavour, but less so than the San Miguel, for example. I also detected a little of that medicinal tang that comes across in wheat beers. I could very comfortably drink this again, though I’m not sure if it’s “wow” enough to join the shelf of my personal top-performers.

In the next instalment of this review series I shall attack the spoils of my latest visit to The Grumpy Goat, where I came back with six – yes, SIX! – alcohol-free beers that I’ve never tried before. This is going to be so awesome.