This weekend is weird. After months of doing virtually nothing at all at the weekend, Pete is out recording with his new band, I’m glued to Robin Ince’s Nine Lessons & Carols for Socially Distanced People, and we’re going to Aylesbury this afternoon to see Christmas Lights and drink mulled wine with Pete’s sister. It’s an exhausting social whirl is what it is.

Furthermore, despite my attempts at a pre-christmas preventative diet, my mother has arranged for the delivery of a huge chocolate cake, supposedly for my birthday which was two weeks ago. I am ungratefully trying to give it away in large chunks, but it’s very hard not to eat a bit of it every time I go into the kitchen. So I’ve been for a run in the drizzle and now I’m sitting down with today’s tea, which is the other Earl Grey in the box, and lives up to its name, Earl Grey Citrus, in spectacular fashion.

The leaves are very pretty. 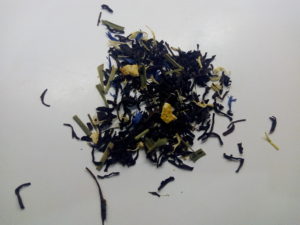 Even before adding water, the scent of lemon was almost overpowering. This is Ceylon tea with bergamot, as you would expect from an Earl Grey; but in addition we have lemon oil, lemon grass, orange peel, cornflowers, cactus and jasmine blossoms. I’m happy to see the jasmine in there, because I often throw a little jasmine tea in with the Raspberry Ruffle, and worry that this is a terrible sacrilegeous thing to do. I’m still not confident I can identify the flavours of cornflower or cactus, so these are wasted on me, but the citrus is powerful, and more so when hot water is added in. 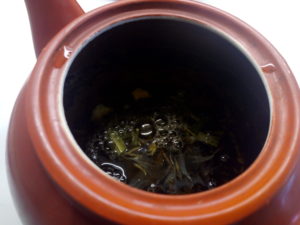 The lemon scent and flavour is far stronger than the bergamot, though the bergamot is discernible, and the result is outlandish but not unpleasant. I would say this is Earl Grey for the Open Minded. It is a little odd to taste lemon in a drink that contains milk, and I know everything I eat for the rest of the day is going to have a citrus tang. 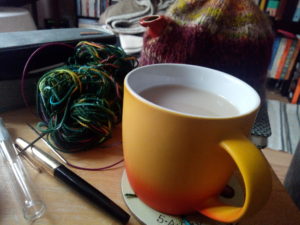 You’ll notice what a very nice mug I’m drinking it out of, and particularly that the sunburst colouring is particularly suited to a tea made of oranges and lemons. What you don’t know is that Pete has expressly forbidden me to use his special mug. But he’s not here.