This tea is billed as a real tea of the people: Milk & Two Builder’s Brew is the tea that built the empire. The box tells us precisely nothing about the composition of the tea; no soft feathery tips selected by virgins at the top of Mount Olympus this time, it just says “contains tea.” It also strongly advocates for drinking it with full fat milk and two sugars, which naturally I have not. 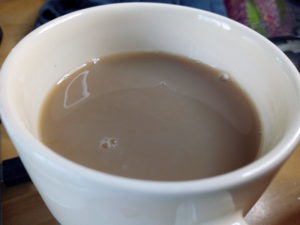 This is far and away the tea-iest tea of the box so far, and for once I feel no shame in telling you that it is brown and it tastes of tea. Having swilled a mug of it, I couild probably now go and build the kitchen extension myself, but I still have all these draft essays to comment on, so perhaps not today. In fact I’m naturally opposed to such lazy labelling and stereotyping, which is why I’ve selected the Brain Surgeon mug to drink it from. I think this mug was acquired at Sevitz’ braai back in, erm, 200andlet’ssay4? There was some sort of random gift exchange and I’m pretty sure this was the item donated by Anna Pickard, now of the San Francisco Pickards, and is also famous for being the event where we first encounter Lori and Topper. What a bloggy mug. 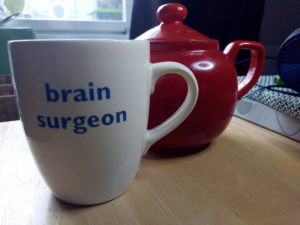