Shall we have a cup of tea? asked Pete, desperately thrashing about for something to do now that we’re in Tier 4. I gave him very clear instructions about which tea to make, and he made a different one altogether, claiming not to have heard me. He then went on to fix himself a scone slathered in this hybrid cream/jam gloop provided as part of his office christmas party, while also claiming moral and scientific superiority over the matter of whether the cream or the jam went on first, and insulted me live on twitter. 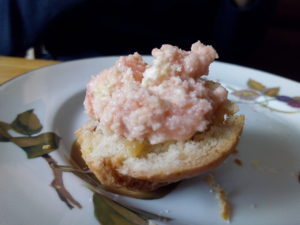 The real crime here is obviously the cream/jam gloop, which may or may not have been ineffectively chilled during transit, so has a slightly unpleasant curdled appearance, although smells and tastes fine. Whether you normally apply the jam first or the cream first, the individual textures contribute important elements to the scone experience, and how hard would it have been for them to send a jar of jam and a pot of clotted cream, which we could have amalgamated ourselves should we have taken leave of our senses and wished to do so? Nonetheless I am grateful for the box of cakes and scones and think that’s a lovely way for a company to celebrate christmas with its employees.

Meanwhile, the tea “accidentally” selected is the Tarry Lapsang Crocodile, which disappointingly contains no crocodile, but is very lapsang. The smokey aroma fills the room and almost makes your eyes water as though you’re standing over a campfire with a marshmallow on the end of a pointy stick. Yesterday the tea wasn’t smokey enough; today it’s too smokey. What are the chances that tomorrow’s green tea (which I should have been drinking today, you know) will be the goldilocks of smokey teas? This is why I like to blend teas to my own taste. Pete made a large potful, so I have tried it both with and without milk, and it works well both ways. One of my biggest worries about going into Tier 4 was how to cope when the milk ran out, so I am now reassured on that point. 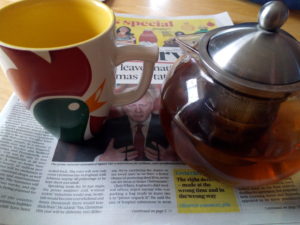 Pete also chose today’s mug, after questioning yesterday why I hadn’t brought this one out yet; before the hydrangea mug (day 1) this was my tea mug of choice. Again, very much about the size and shape, not the decoration. I used to work for a social audit company attached to a lab where they did safety testing on toys and household items. Every few weeks there would be a “sale,” where in return for a charity donation, you could help yourself to those testing samples that had survived the process. I always made it a point to select one item that was still in its plain packaging, for the fun of finding out later what it was. And hence the Kellogs mug came home to brew.