It is the shortest day, and yet days have never felt longer. By 4pm I’m thinking about making dinner because I have done everything else, but then we have an endless evening illuminated only by Schitts Creek and, apparently now, Minecraft. I don’t have a lot of actual work to do, but I haven’t booked leave today because that’s an even bleaker prospect. Remember when we thought we were saved because a vaccine was coming?

I am down to the last four teas, two of which are green, one of which is today’s tea: Jasmine Monkey King. Monkey. Hehe. I don’t like green teas, as we know, but I do like jasmine. Once a long time ago I went to China and one of the things I brought back was a packet of pretty jasmine tea. A few weeks later Pete opened the packet to brew up some tea, and a cloud of insects flew out of it. I wouldn’t have told that story if it had happened in 2020. 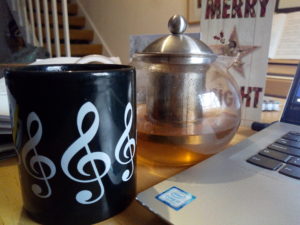 This tea is satisfyingly, prettily golden and smells of gardens and the summer, making it a necessary salve for this overcast dreary season. I’m thinking about making an order from Imperial Teas of Lincoln to cheer up my January, and if I do then this will be on it. I do have quite a lot of tea already, though. There is a very long explanation of the process on the box, which you can read in full here. TL;DR: night-blooming jasmine, picked at dawn. An absolutely lovely, fragrant tea.

The mug I’m drinking from is one of those that you see in music shops as a generic “gift for music lovers.” It was given to Pete by my dad, on the basis of Pete’s a musician, obviously he needs a mug with treble clefs on. I think there were matching socks. Now that he knows Pete better, Dad likes to gift him second-hand biographies of random musicians, most of which Pete reads even when he has absolutely no interest in Echo & The Bunnymen or the UK Subs or whoever’s book has most recently fallen into the Dove House Charity Shop. Not that Jonny Rotten book, though, that’s been declared unfit for human consumption by Dr Pockless, who has received at least two copies of it via the same source.

n.b. If the mug had had a bass clef, it might not have been relegated to the box in the garage.